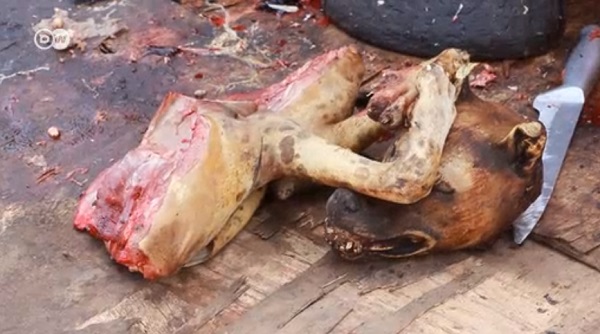 Dog meat sellers at Sandema in the Builsa North Municipality of the Upper East Region were disappointed when they visited the major market in the area to buy dog meat.

When the Ghana News Agency (GNA) at Sandema visited the dog meat market on a market day in the Municipality, it observed that the usually busy market was deserted.

There were however other animals such as sheep and goats for sale.

Dada Bee, a popular dog meat seller at Sandema who expressed worry about the situation, told the GNA that “I went to the dog market this morning at about 0900hours only to realise there was only one dog in the market for sale.

“We were six dog meat sellers in the market at that time, all bargaining to buy the dog. I was able to buy it because I offered to pay GH¢185.00 for what I would have ordinarily bought for GH¢140.00.”

Dada Bee explained that it was a market day, and he could not afford to disappoint his customers, who usually trooped to his place to buy their favourite delicacy by midday.

He said some customers who were aware of the shortage were comfortable with the prices, while those who did not know still bargained for the old price.

“Though some customers will initially complain about the prices today when I tell them the situation, they understand and buy at the price I offer,” Dada Bee said.

Dada Bee and his colleagues could not give the exact cause of the shortage except to jokingly say “The people have eaten all the dogs”.

The dog meat sellers usually move from home to home to buy the animals and also travel to other markets such as the Fumbisi, Yagba and Kubori markets to buy.

“For the past week, all the markets could not give us the numbers we usually buy so the demand for the meat has gone higher than we can supply”, they said.

Mr Abdulai Arimeyaw, a Butcher, told the GNA that “I deal in sheep and goats, but we were all surprised this morning when we came and realised the shortage of dogs in the market.”

According to him, there was a general shortage of all animals in the market, which led to a price increase. “Now unless you have GH¢200.00 or more, you will not get a sizeable goat or sheep, which used to be sold at GH¢ 150.00 to buy. I came and couldn’t buy any, and so I am returning home.”

Owing to the shortage of dogs in the market, most vendors slaughtered pigs for their customers, while others shut down their joints.

The delicacy is usually served with powdered dry pepper and chopped onions depending on the buyer’s choice, and it is the favourite of many residents of Sandema and its environs.

One of Dada Bee’s customers who was seated at the joint to buy his favourite part of the dog meat while it was on fire, said “I rushed here from my office to buy the meat and return. I just heard this morning that there was a shortage of dogs in town.

“But despite the shortage, I knew Dada Bee will not disappoint his customers. The only problem is that the shortage will affect us because the prices of the meat will definitely go up,” he said.