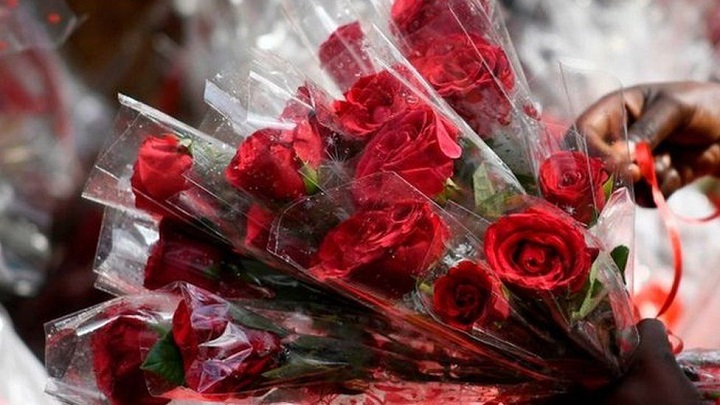 Women of Nigeria watch out - the men are in revolt.

That is, at least, according to the country's Stingy Men Association.

It is a fictional creation - a light-hearted response on social media that emerged earlier this year to some male concerns about the cost of dating.

"It's tough being a man in Nigeria, there is too much pressure on us," 35-year-old Lagos-based journalist Fred Itua told the BBC.

"Everyone expects so much from you. Men should not be seen as spending machines, we also want to be pampered."

Another man echoed this, saying on Facebook that he felt he did not get the recognition he deserved for the cash he had spent on dates: "Most generous guys are seen as objects to be manipulated, used and disrespected for their generosity."

The buzz the Stingy Men Association generated on social media gave way to an app, which allowed those that downloaded it to design their own ID cards. It got more than 50,000 downloads within days.

"Members" were also expected to swear an oath to give "shishi" (Nigerian slang for "nothing") to women.

But some women were sceptical that men could stick to their guns - a view summarised in a tweet showing a photo of an actress in a minidress accompanied by the words: "I dressed like this to his house and he denounced his membership of the Stingy Men Association."

But like a lot of comedy, this really was about something very serious: how young Nigerian men and women should treat each other in a relationship.

Dating in Nigeria can be an expensive business.

'I had to pay a bill with my watch'

There are some young women who appear to expect men to take care of their every needs, which are not cheap.

They could demand the latest gadgets, the latest fashions and the best make-up, setting someone back hundreds if not thousands of dollars.

Their date also has to pay for nights out, which can come with hidden costs. In a context where many men in Nigeria are not earning much money there is a lot of pressure.

"When I was a bachelor, I took a lady out on a date and made a budget for the two of us," Mr Itua said.

"But she came with her friend and they ate meals I couldn't afford. She didn't offer to split the bill, so I had to give up my wristwatch to balance the fee. She even refused to date me afterwards."

He felt used, but that expectation of a follow-up date reveals something about the dynamic of a dating relationship where money is involved.

For some men there may also be an expectation of sex and women also feel that pressure.

"Usually, their intention of dating is for their own sexual benefit.

"Women ask for money and gifts as a form of reward in order not to feel used."

"In many countries, it's not odd to see a woman pay bills on a date, but in Nigeria, men make women believe they must be the ones to pay for everything."

She says she found it difficult to have a relationship when she insisted on paying her way.

"I never had any ex that paid my bills because I have always been an independent woman.

"This actually made it hard for me to stay in a relationship for long before I eventually got married."

"No-one should base their relationship on a transaction," she adds.

Psychologist Ann Uramu, in her mid-20s, is single and often goes on dates.

But she is not bound by the unspoken rules.

"Most times when I go on dates and the guy wants to pay, I let him, but I make sure I pay on the next outing," she says.

"I always define my values at the beginning of a relationship and I don't date people who don't have the same understanding with me.

"I am a Christian, so I believe in sex only in marriage. I don't allow anyone to spend too much on me.''

As Nigerians move on from the Stingy Men Association social media trend, Ms Uramu suggests relationships should be based on pure affection.

"Love should be the key thing in an ideal relationship, where partners put each other first and nothing else matters. Love isn't selfish, so both parties should respect and support each other."

Ms Kanu agrees that it should be a true partnership where "money and sex shouldn't be the only things on offer".

Parents also have a responsibility to shift attitudes and "train their children to see things differently. The re-orientation has to start from home", the fashion designer says.

That could, however, take some time, but things are changing.

"There are strong, hardworking women now. So many women take care of themselves financially and even support their men," she says.

"So, not all women are waiting for men to pay their bills."