At a time a section of society thinks marriage is not necessary due to the challenges involved, some couples continue to prove that it is worthy for a man and a woman to live together as husband and wife for the rest of their lives. 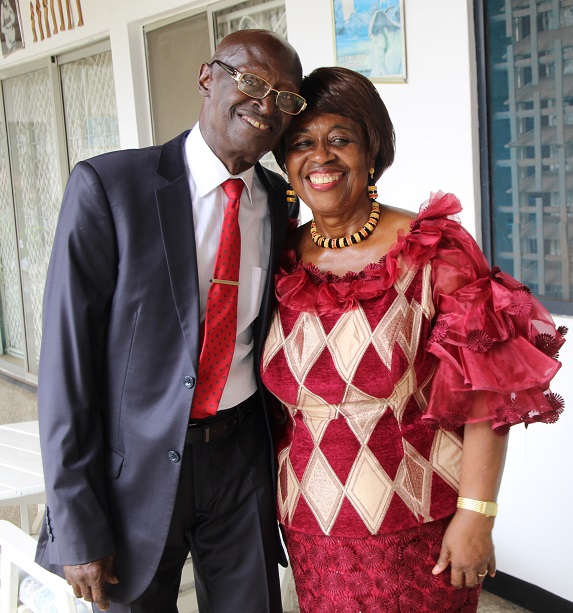 The story of Mr Nicholas Duku and Mrs Agnes Ruth Duku, who have been married for 61 years , is one that is inspiring to both married couples and those preparing to enter this union.

Even in their old age, the two lovebirds make their love story interesting and awe-inspiring — one that you will always want to listen to over and over again. 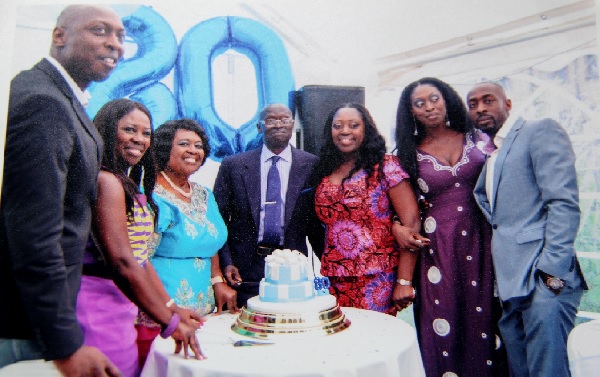 Mr Duku, a retired banker, is 86 years old now, while his wife, Mrs Duku, a professional caterer, is 80 years.

When I was given the lead to speak to the couple, I thought I was going to meet two people using walking sticks since they had advanced in age, but that was not to be.

The twins, as they are popularly referred to in their church, Mount Calvary Cross Ministry at Achimota in Accra, are able to go about their daily activities with few difficulties.

They both have a sharp memory of events even in their old age and are able to recall almost everything that has occurred in their life ever since they met in October 1958.

The love story cannot be told without the mention of the late Maame Ama Kyeiwaa, Mrs Duku’s grandmother

Mr Duku hails from Adweso Kwamu and Mrs Duku from Kumawu, both in the Ashanti Region.

The blessing of their marriage has been transferred to their children such that one has also been married for 30 years, and another more than 15 years.

Assistance
At his age, Mr Duku mops the kitchen and assists his wife in diverse ways as part of the support and a way of showing love to his partner as a man, a trait he said a lot of men lacked today.

According to him, when he first met his wife, who he affectionately calls Mummy, he was a trader at Kingsway stores in Kumasi, but she accepted him.

“Due to the things I was doing for my wife, people thought I was a fool, but that is never the case. We understand, care and assist each other. Our love story is such that you must not only hear us talk about it, you must be here to feel it. We express our love genuinely.

“I tell people that there is no secret in marriage; there must be a deliberate attempt by both of you to make the marriage work. We have always strived to understand each other. I think we are blessed as a couple for all these years,” Mr Duku told The Mirror while showering praises on Mummy.

Life in Ghana/UK
The couple got married in 1959 and two years afterwards, Mr Duku had an opportunity to travel to England in 1961 to study.

He read Business and Banking at the Barking College of Technology in the United Kingdom, after which he worked for four years in the Civil Service over there.

He later resigned and joined the Barclays Bank in the UK where he worked for 25 years until retirement.

While in the UK, he made arrangements for his wife to join him, and they both continued to live a happy life and became a shining example to other couples.

“When I asked for her hand in marriage from her grandmother, the late Maame Ama Kyeiwaa, she said she was not taking anything from me. I did not pay any bride price, but she requested I take good care of her granddaughter and I gave her the full assurance.

“By God’s grace, I have been able to take good care of her to date, and we are happy together. I have been telling my wife that if we die and come back to the next world, I will be looking for her to marry because she has given me so much joy. I have never regretted marrying my wife and will not regret it," he stated.

“There is something remarkable Mummy was doing when I was in the UK and she had to come back to Ghana with the children to help with their education. She was concerned about my welfare such that at some point, she was preparing assorted food and sending it through Ghana Airways to me. If your wife is so much concerned about your welfare, there is nothing you will not do for her. That is what ladies of today must learn— concern and sacrifice,” he emphasised.

Traits in husband
Mrs Duku said she was a happy and fulfilled woman for choosing her husband who she also refers to as Daddy, and would choose him again when given another opportunity. 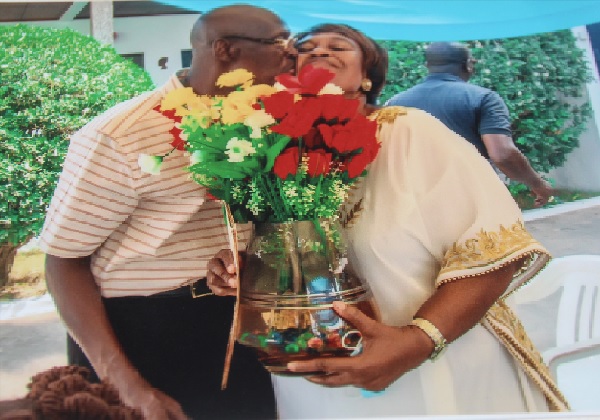 The couple sharing some love moments

She told The Mirror that “what I saw in him and decided to be with him is that my husband is trustworthy, respectful, caring, sensitive and nice. These were enough proof of the kind of man I was going to live with".

“Throughout our 61 years of marriage, I say it to the glory of God that Daddy has never laid his hands on me before, even though we do have our disagreements sometimes. When he is angry, he just walks away. Besides, since we got married, we have never had financial problems, not because we have money, but we understand each other,” she added.

Advice
Mr and Mrs Duku advised couples and those preparing to get married to care for each other, understand and show a high level of concern towards each other and be each other’s keeper.

Mrs Duku believes that “love must emanate from the couple. You must trust each other and find better ways of handling your in-laws.
“As a woman, you must learn to pamper your husband and there is nothing that he wouldn’t do for you as a responsible man. Couples must also learn how to say sorry and thank you," she said.

“A woman has her roles and duties, so does a man. If you try to compare and rub shoulders with your husband, you will end up with problems. Don’t confuse modernity with marriages. Let your marriage be natural and find out what suits you as a couple and not what society says. As ladies, do not compare your life to others unnecessarily and live within your means,” she added.

She encouraged the youth to marry because it was an institution blessed by God.