Living on streets; Ordeal of the homeless [VIDEO] 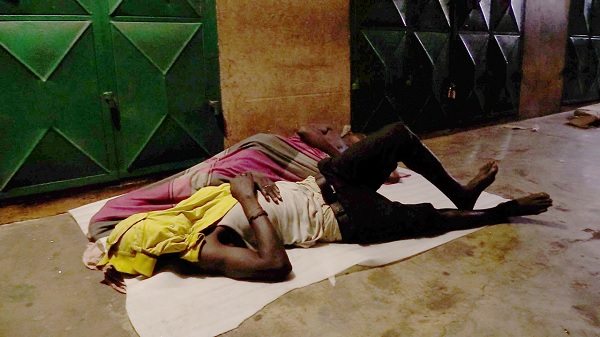 These people were spotted sleeping by a smelly gutter and rubbish at the Central Business District.
30.5k Shares

At night, the city of Accra divides into two worlds — one world for those who close their eyes to sleep in comfort in their homes and another for others who turn the streets into bedrooms, not as a matter of choice, but because they have nowhere to go.

These homeless individuals who are made up of men, women and children usually pile themselves up in front of shops, stores and on pavements and beside gutters, just to get a place to lay their heads at night.

Seeing the condition in which these people sleep at night is one that might easily bring sorrow to one’s heart and tears in the eyes.

Though a phenomenon in many parts of the country, the situation is rife in the capital city of Accra where many struggle to make a living.

It is 12:15 a.m. and scores of people have worn sacks to protect themselves from mosquitoes and squeeze their bodies onto shelves to catch some sleep in front of stores at the Central Business District (CBD) of Accra.

They snore and seem to enjoy every bit of their sleep near a smelly gutter, but they have to intermittently ward off mosquitoes from their bodies with their hands.

The situation is more appalling along the Accra-New Town road and the streets within the Mallam Atta Market where hundreds of women and children lay on the shoulders of gutters and in front of shops.

On Monday and Tuesday, as the clouds became moody at Jamestown, Lapaz, Kaneshie, Kwame Nkrumah Circle, and Adabraka, sleeping remained uncomfortable and a struggle for the homeless. 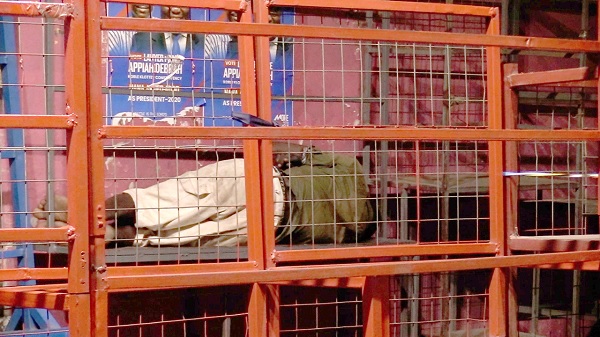 At about 11.30 p.m. on Monday at Tudu, a group of men numbering about 20 were holding their mats in front of stores as they waited for the rains to cease so they could lay their mats on the bare floor to catch some sleep.

Those who could fix mosquito nets did so, but that also was only able to cover a few people.

Sharing her ordeal, a 20-year-old junior high school (JHS) dropout, who only identified herself as Joy, said she and her parents had to join others to sleep in an uncompleted structure at Tudu at night because they did not have the means to rent a room.

Some wear sacks and coil themselves into shelves to catch some sleep at night.

“Even though school is free, my parents do not have the money to provide for me the things I will need for my academic work, so I had to stop schooling at JHS 2. But I wish to go back to school if I get any help,” she told The Mirror as she communicated fluently in English.

Cosmos Kose and Stephen Kubaje, who both charge mobile phones for a living at Tudu and Makola came from the Upper East Region.

They said they, together with their friends had to struggle at night to get a place to lay their heads.

Mr Kubaje told The Mirror that they had been attacked by robbers countless times because they didn't know where to sleep.

“Just few days ago, some of my friends were attacked and nobody came to our aid. It is not our wish to be sleeping here. Situations have made it so”.

“We are appealing to the government and other benevolent organisations to help us because it is not a comfortable situation at all. Nobody would be happy living their life here,” Mr Kose said.

One of the “fixers” who led The Mirror team round the CBD said, “When you see these people coil onto the shelves at night, you might think they are goods in a sack.”

When night falls some people have to sleep in front of shops at the mercy of the weather.

I have been living my life as a 'kaya' here for the past 25 years. Even though I have been able to take care of my children through school, it is my hope that one day, I will leave here,” a 56-year-old man, Mr Wahab Akotra, who comes from Techiman in the Bono East Region, said.

Princess Aremyaw, a 'Brukina' drink seller who came from the Savannah Region, said she was only in the capital to gather some money to help her parents back home.

“All that we are begging the government to do is to build a place for us so that we can all go there. That is safer than sleeping on the streets,” she said.

Meanwhile, there are those who sleep on the streets to protect their items as they come from far to trade in Accra.

Night time presents an avenue for the homeless to dry their things in front of shops.

A trader who had joined some friends to sleep in front of the Graphic Press House in Accra said they were only doing so to protect their fish which they had to sell the next day or two, and until that was done, they could not go back to Winneba in the Central Region where they came from.

Rape
One of the major problems these “street hustlers” face is sexual abuse.

Some of the women recounted harrowing incidents of how some unscrupulous men forcibly had sex with them at night as they slept on the street.

Only a few are able to use mosquito nets to protect themselves.

“Apart from robbing us, some of the men get here to rape some of the ladies,” one of the women who wanted to remain anonymous said.

Addressing the situation
In 2019, the government promised to build a hostel facility at Agbogbloshie, near the Timber Market in Accra to house head porters.

The land earmarked for the hostel facility at Agbogbloshie in Accra is currently not in use.

This was re-echoed by the former Minister of Finance, Mr Ken Ofori-Atta, when he presented the 2020 Budget in Parliament.

“Mr Speaker I am happy to announce that preparations are now complete and the construction of the first 600-bed kayayei hostel will commence in Agbogbloshie next month to provide accommodation and skills training to these vulnerable young women,” he is quoted to have said.

However, a visit by The Mirror to the site which was earmarked for the project showed that nothing had been started.