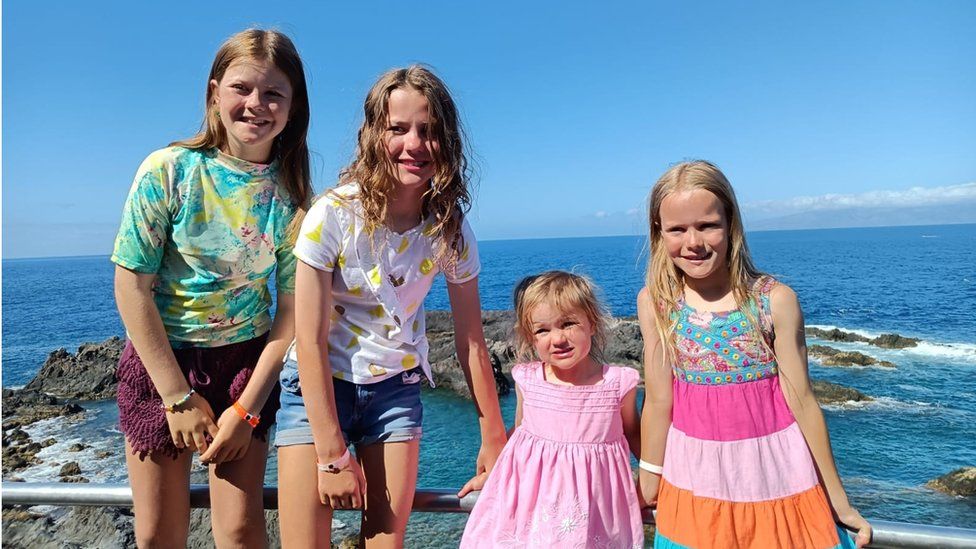 Ben, 17, was due home on Saturday in plenty of time to take his maths GCSE on Tuesday, but after a cancelled flight and a frantic scrabble for train tickets, he will only just make it.

He is one of thousands of British holiday-makers thought to be stranded abroad, after the cancellation of more than 100 flights over the weekend.

Among them are hundreds of school pupils and some teachers set to miss school on Monday after half-term.

And they face an anxious journey home.

"Ben was going to have a couple of days at home to get his revision in, prepare mentally for it," said his mother Emma, who did not want their surnames used.

After their EasyJet flight home from Paris was cancelled, the earliest flight back that the airline could provide was on Tuesday - too late.

So after spending hundreds of pounds on Eurostar tickets, they are now due to arrive back at home in Stockport by 11:30 BST on Monday evening, in time for the exam on Tuesday morning.

"Hopefully he'll get there. But there's no guarantee," she said. And EasyJet had been "impossible to contact and completely unhelpful", she added.

There are reports that others are even less lucky and are missing GCSE or A-level exams altogether.

Airlines are being blamed for taking more bookings than they can manage with lower post-Covid staffing levels.

But the airlines themselves say the government could also have done more to support the industry during the pandemic and to speed up the process of security checks for new staff now.

"Some airlines relied on EU citizens for up to 30% of their workforce, pre-Brexit, so that labour pool no longer being available adds to the challenge that we have here," he said.

However, Transport Secretary Grant Shapps has rejected such a request from the aviation industry.

Hundreds of flights have been cancelled over the past week. While some families never reached their destination or arrived late, others are now finding their return flights are not operating.

It is not just exam students - younger children are missing the start of the new half-term too.

The family had booked return flights from Tenerife to be back in time for the Jubilee celebrations but missed the whole four-day weekend after Wizz Air cancelled their return twice.

"Wizz Air have had since last Wednesday to get us home, have cancelled once whilst we had checked in and were waiting at the gate, and the other four hours before the flight," Mr Murray said.

Holiday-makers who spoke to the BBC said they were shocked at the lack of communication from the airlines.

EasyJet apologised for the disruption, saying it was doing everything it could to support passengers. It has extended its customer service opening hours from 07:00 to 23:00, and said it was helping those affected find hotel accommodation.

Wizz Air also apologised and said passengers would be offered alternative flights, a full refund or 120% in airline credit, which it aimed to process within one week.

But the ongoing upheaval will affect children who have not even left home, with some school staff also stranded and unable to get back in time.

Kelly and her husband are making their way as fast as they can from Montenegro back to Lincolnshire. After their flight home was cancelled on Sunday, EasyJet offered them an alternative flight on Thursday.

"We are both teachers so have to get back," says Kelly. So instead they took a bus to Dubrovnik, Croatia, where they waited for more than four hours in the bus station for EasyJet to confirm their accommodation.

They will take a four-hour bus trip to Split on Monday so they can fly from there to Bristol on Tuesday. They will then get a train from Bristol to Gatwick to pick up their car and with a bit of luck be back in the classroom by Wednesday.

"We do feel really let down by EasyJet," said Kelly. "We wanted to get back to work as soon as we possibly could and they didn't help with that at all."

Pol, who teaches in a special educational needs school in west London has had a similar experience trying to get home from Bodrum, Turkey.

The students at his school find changes to their teaching schedule particularly upsetting, he said. So he does not want want to be away longer than he can avoid.

"People from home think a couple more days in the sun, it can't be that bad being in the Mediterranean by the sea, but the point is we're all uptight and upset and to a certain degree disgusted that in the 21st century we're dealing with a company that prides itself on being digital but there's no information."

EasyJet said it had cancelled about 80 flights on Sunday "due to the ongoing challenging operating environment".

"We are very sorry and fully understand the disruption this will have caused for our customers," the airline said, adding it was doing everything possible to get passengers to their destinations.