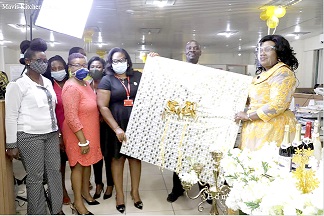 Ms Doreen Hammond, the Editor of the Junior Graphic, (third left), with members of staff of the paper, presenting Mrs Mavis Kitcher with a gift.

The first Editor of the Junior Graphic, Mrs Mavis Kitcher, retired from office on Monday, October 5, 2020, after a party was held in her honour at the newsroom of the Graphic Communications Group Limited (GCGL) in Accra.

She retired as the Director in-charge of News of the company after serving the company for 37 years.

In attendance
The celebration to bid her farewell attracted well-wishers from all the brands and editors of the company, the Managing Director, Mr Ato Afful, and the Director in-charge of Human Resource, Ms Peggy Addo.

The event was also graced by the Minister of Tourism, Arts and Culture, Mrs Barbara Oteng-Gyasi, who is a younger sister of Mrs Kitcher; the Director-General of Police Welfare, Commissioner of Police (COP) Mrs Maame Yaa Tiwaa Addo-Danquah; the President of the Ghana Journalists Association (GJA), Mr Roland Affail Monney; the Vice-President of the GJA, Mrs Linda Asante Agyei; the Treasurer of the  GJA and members of the Association of Women in Media (ASWIM), of  which Mrs Kitcher is the interim President.

The well-wishers gave tributes and presented gifts to Mrs Kitcher for her hard work and dedication to the company.

Mrs Kitcher thanked all present for their show of love.

Career
She built her entire career at the GCGL, starting as a reporter. She became the Women’s Editor of the Daily Graphic, during which time she wrote a weekly column on issues affecting women in the country.

When she was appointed the Editorial Administrator in 1998, she became the administrative head of the News Department where she liaised with the Human Resource Department to organise training programmes and recruiting journalists, proofreaders and other members of staff for the department.

During her tenure, she introduced written examinations as a requirement for recruiting reporters and proofreaders to ensure that those employed had the needed skills for their assigned tasks.

As the Editor of the Junior Graphic, she mentored reporters to become key writers working on the various brands of the GCGL.

Apart from that, she has mentored many readers of the Junior Graphic through the paper’s fan clubs across the various regions to generate interest in reading, writing and journalism.

Some of these students have trained to become professional journalists and won awards from the Ghana Journalists Association.

She also holds an Executive Masters in Business Administration (EMBA) in Human Resource Management from the University of Ghana Business School.

Her training in business enabled her to, over the years, source funding from international donor agencies such as UNICEF, the UNFPA/PATH, the African Youth Alliance (AYA) and Plan Ghana, to plan and execute various projects for the company.

Mrs Kitcher is also a graduate of the Ghana Institute of Journalism, a member of the Ghana Journalists Association (GJA), and a former Vice Chairperson of the Graphic Chapter of the GJA.

She is married and has three children.