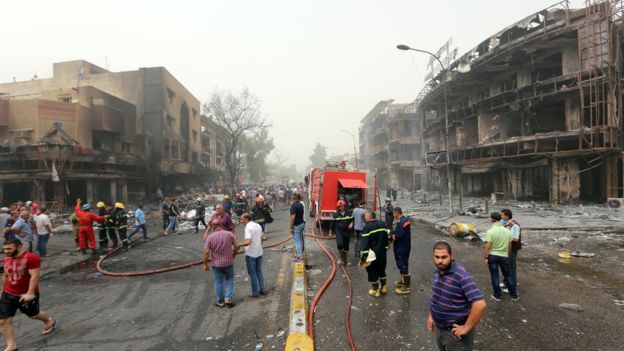 At least 125 people have been killed and many more injured in an explosion claimed by the Islamic State group in Baghdad, Iraqi police say.

A car bomb exploded near a restaurant and shopping area in the central district of Karrada late on Saturday.

The street in the mainly Shia area was busy with shoppers in the holy month of Ramadan, which ends this week.

Iraq's Prime Minister Haider al-Abadi was met by angry crowds while visiting the scene of the blast on Sunday.

A second bomb also exploded at about midnight in a predominantly Shia area north of the capital, killing another five people.

The bombings, among the deadliest in Iraq this year, come a week after Iraqi security forces recaptured the city of Falluja from Islamic State (IS) militants. Authorities say the city was used as a launch pad for attacks on Baghdad.

The destruction and death at the site of the bombing adds up to a clear message from the jihadists of so-called Islamic State. They are saying that, even if they are defeated on the battlefield, they can still hit back where it really hurts - killing civilians in the centre of the Iraqi capital, and other capital cities, too.

IS have just suffered a serious defeat at the hands of Iraqi forces in Falluja. The town, less than an hour's drive from Baghdad, has been in their hands since early 2014. IS are showing their supporters, and their enemies, that they are not beaten.

So many were killed and wounded because the streets are crowded at night at the end of a day's fasting during Ramadan, with thousands in a mood to celebrate.

It is only realistic to fear that there will be more attacks like this, as IS comes under more military pressure.

The jhadist group, which follows its own extreme version of Sunni Islam, said in a online statement that it carried out the bomb attack.

There are reports that the source of the blast, which struck close to midnight, was a refrigerator van packed with explosives.

Many of those killed in the attack were children, Associated Press reported. Families gathered on the street on Sunday morning for news of loved ones who were still missing.

The explosion caused a huge fire on the main street. Several buildings, including the popular al-Hadi Centre, were badly damaged and were still on fire early on Sunday.

Mr Abadi visited the scene in the morning, and was met by crowds who shouted "thief" and "dog". Video posted online appeared to show a convoy, reported to be Mr Abadi's, being pelted with stones.

Hackers broke into the interior ministry website and placed a gruesome picture of a dead child and a drawing of a fake bomb detector, one of the useless devices still in use in Baghdad at checkpoints, he adds.

IS still controls large swathes of territory in the country's north and west, including Mosul, Iraq's second largest city.

But the group has been under pressure in Iraq and in neighbouring Syria, where it has been targeted by government forces and US-backed rebels.