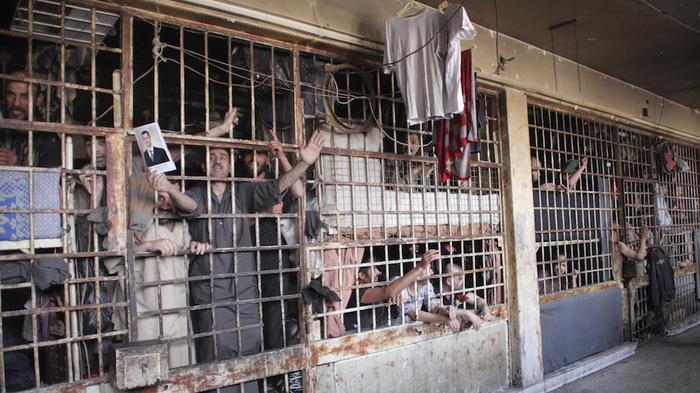 Almost 18,000 Syrians have died in government jails since 2011, with authorities using torture, beatings, electric shocks and rape against prisoners on a "massive scale," a rights groups has said.

The UK-based Amnesty International said on Thursday that an average of 300 people were dying in the country's prisons each month in a report it said was based on the experiences of thousands of former prisoners, including 65 survivors of torture.

Interviewees said the abuse would often start from the day they entered prison with so-called "welcome parties" that involved beatings with silicone or metal rods.

"They beat me until I was lying on the ground and then they kicked me ... until I passed out," Umm Omar, who was held at a jail in the city of Aleppo, said.

"When I woke up ... my trousers had been opened and moved down a bit, my abaya [full length robe] was open and my undershirt was moved up. Everything was hurting."

Nicolette Boehland, one of the Amnesty researchers who worked on the report, told Al Jazeera that "welcome parties" were so intense that some prisoners died from their injuries.

"One man said that when he arrived at Damascus' Saydnaya Military Prison with 60 other people, the beatings were so brutal that by the time he reached his cell, he heard that 20 men had been killed," she said.

Other prisoners spoke of being flogged on their feet during interrogations, being forced into rubber tyres while being beaten with plastic pipes, being suspended by their wrists and having their bodies forcefully "folded" backwards while in stress positions.

"They treated us like animals. They wanted people to be as inhuman as possible," Samer, a lawyer, said. "I saw the blood, it was like a river ... We used to always say here that there was no justice in Syria but I never imagined humanity would reach such a low level."

Most described witnessing at least one, if not several, deaths in custody, Amnesty said.

One former prisoner said when the ventilation system in a prison known as Military Intelligence Branch 235 in Damascus stopped working, seven out of nine people in one cell died of suffocation.

"They began to kick us to see who was alive and who wasn't. They told me and the other survivor to stand up against the wall and that is when I realised that on that day seven people had died, that I had slept next to seven bodies," he said.

According to the report, access to food, water and sanitation facilities was severely restricted with diseases thriving among the prison population.

"The cell had no toilet, no water," Abu Anas, a businessman, told Amnesty.

"They allowed us to use a bathroom after meals ... we had about 60 seconds each time. Once I took longer than that. By that time I had a beard already, and the guard forced me to take my excrement from the toilet and cover my face with it."

Amnesty urged foreign governments, in particular Russia and the United States, to pressure the Syrian authorities and armed groups to end the use of torture and other ill-treatment.

"For decades, Syrian government forces have used torture as a means to crush their opponents. Today, it is being carried out as part of a systematic and widespread attack directed against anyone suspected of opposing the government," Philip Luther, Director of Amnesty International's Middle East and North Africa Programme, said.

"Those responsible for these heinous crimes must be brought to justice."

The Syrian civil war started as a largely peaceful uprising against President Bashar al-Assad in March 2011, but quickly developed into a full-scale war.

The United Nations special envoy for Syria, Staffan de Mistura, estimated in April that more than 400,000 Syrians had been killed, though he said that number was not an official UN statistic.

Almost 11 million people - half the country's pre-war population - have fled their homes.