An Israeli military investigation has cleared its forces of wrongdoing over the deaths of four Palestinian boys in an attack in Gaza during the 2014 war.

It concluded the boys, killed in missile strikes on a beach, had been mistaken for Hamas militants preparing to attack Israeli forces.

At the time, the incident drew widespread condemnation.

It happened early on in the 50-day war between Israel and Gaza militants which lasted from July to late August.
The conflict left at least 2,189 Palestinians dead, including more than 1,486 civilians, according to the UN. On the Israeli side, 67 soldiers were killed along with six civilians.
'Misidentification'

Announcing the findings of the report, Israel Defense Forces (IDF) said Israeli military police had carried out a "criminal investigation", during which testimonies were gathered from Israeli troops involved in planning and carrying out the strike, and from three Palestinians who said they witnessed the attack.

The report said the incident happened in a compound separated from the civilian part of the beach and used exclusively by Hamas militants.

On 16 July, it said, the IDF had intelligence indicating that militants would be gathering there to prepare an attack.
It said aerial surveillance saw several individuals believed to be militants entering the compound and that the order was given to launch a strike "after a civilian presence in the area had been ruled out".

"It should be stressed that the figures were not identified at any point during the incident as children," the report said. 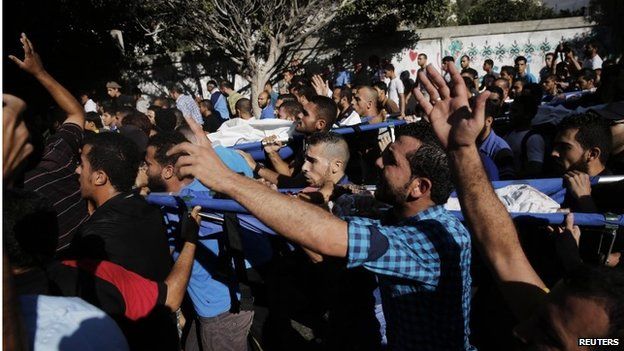 "Tragically, in the wake of the incident it became clear that the outcome of the attack was the death of four children, who had entered the military compound for reasons that remain unclear," it said.

The report said it transpired that the targets had been misidentified but that "the attack process in question accorded with Israeli domestic law and international law requirements".

It said the file would now be closed without any further legal proceedings.
Criminal probe

In the wake of the incident, the UN's then top human rights official Navi Pillay accused Israel of having shown a "disregard for international humanitarian law and for the right to life".

The IDF said it was also closing cases involving missile strikes on two buildings which killed 22 Palestinians, and had ordered criminal investigations into a strike on a Gaza cafe which killed nine people.
Israel said it launched its offensive on Gaza to put an end to rocket-fire and remove the threat of attacks by militants tunnelling under the border.

A UN Human Rights Council report on the war is expected to be released shortly.