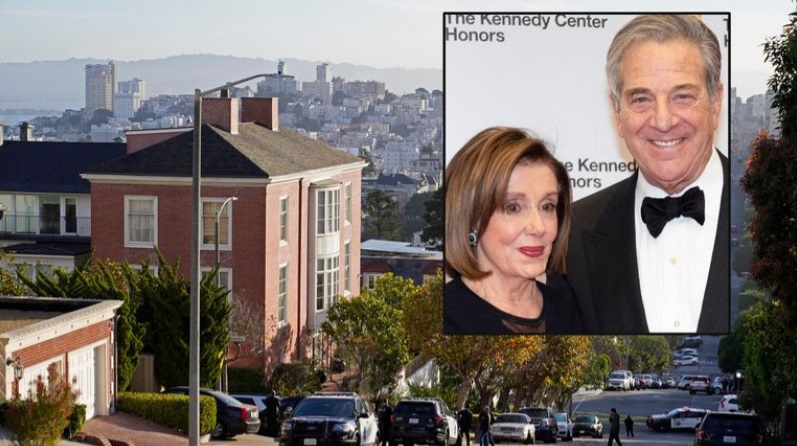 Paul Pelosi has undergone surgery for a skull fracture and severe injuries to his right arm and hands after he was attacked by an intruder with a hammer in his home.

US President Joe Biden has described the violent assault on US House Speaker Nancy Pelosi's husband as "despicable" – as San Francisco's police chief has said it was "not a random attack".

Paul Pelosi, 82, is recovering from a skull fracture after he was attacked by an intruder with a hammer on Friday.

The intruder - David DePape - broke into the couple's home in San Francisco at around 2.30am, reportedly looking for the US House Speaker.

Police said officers were called to the house for a "wellbeing check" and arrived to find both men holding the hammer.

The suspect then pulled the hammer away from Mr Pelosi and used it to "violently assault" him, before being tackled by police officers.

The suspect appears to have made racist and often rambling posts online, including some that echoed QAnon conspiracy theories, according to initial investigations.

His posts also questioned the results of the 2020 election and defended former president Donald Trump.

The 42 year old grew up in Powell River, British Columbia, before leaving about 20-years-ago to follow an older girlfriend to San Francisco. A street address listed for DePape in the Bay Area college town of Berkeley led to a post office box at a UPS Store.

He was arrested at the Pelosi home early on Friday.

A motorcade believed to be carrying Mrs Pelosi arrived at Zuckerberg San Francisco General Hospital on Friday, where her husband Paul is being treated.

She was in Washington when the assault occurred and flew back to San Francisco International Airport.

The US president sharply condemned the attack on Mr Pelosi and drew parallels between the attack on the House speaker's husband and the US Capitol riots.

Speaking at an event in Philadelphia on Friday evening, he said he had earlier spoken to Mrs Pelosi and she reported that her husband was in "good spirits".

He went on to address reports that the assailant had repeated the "same chant" heard during the 6 January 2021 riots.

"There's too much violence, political violence," the president added, suggesting that election denialism and claims that COVID-19 was a "hoax" had eroded the political climate.

"Every person of good conscience needs to clearly and unambiguously stand up against the violence in our politics, regardless of what your politics are," he said.

'Not a random act'

He said: "This was not a random act. This was intentional. And it's wrong."

Mr Scott declined to comment further on a possible motive for the assault and said the investigation was ongoing.

Mr Pelosi was rushed to hospital and underwent surgery for a skull fracture and severe injuries to his right arm and hands, a spokesperson said.

He is expected to make a full recovery.

DePape has been charged with attempted homicide, assault with a deadly weapon, elder abuse, burglary and several other felony charges.

His motive has not yet been made clear.

Mrs Pelosi's spokesperson, Drew Hammill, said her husband had been attacked "by an assailant who acted with force, and threatened his life while demanding to see the Speaker".

Mrs Pelosi, the Democratic speaker of the US House of Representatives, and second-in-line to the presidency, was in Washington DC at the time, having recently returned from a security summit in Europe.

Had she been at home, her security detail would have been present but Mr Pelosi is not eligible for this protection on his own.

Senate Majority Leader Chuck Schumer said in a statement: "What happened to Paul Pelosi was a dastardly act.

"I spoke with Speaker Pelosi earlier this morning and conveyed my deepest concern and heartfelt wishes to her husband and their family, and I wish him a speedy recovery."

After the attack, the White House released a statement saying "the president is praying for Paul Pelosi and for Speaker Pelosi's whole family", adding he was "very glad" a full recovery was expected.

The attack is being investigated by San Francisco police, Capitol Police, and the FBI.

It comes amid growing concern about the safety of America's politicians almost two years after the Capitol insurrection in January 2021, when Mrs Pelosi's office was ransacked.

Last year, Capitol Police investigated around 9,600 threats made against members of Congress from both parties - nearly a threefold increase since 2017.