The spiritual shackles: A peep into the witches’ camp

Do you believe in the existence of witchcraft? Have you ever wondered how people acquire witchcraft? Or have you ever attributed something bad that happened to you to witchcraft activities?

If you share any of the above beliefs, you may be holding on to a credence that several millions of people around the globe ascribe to. Believing in witchcraft is as old as time.

The Oxford Advanced Learner’s Dictionary defines witchcraft as “the use of magic powers, especially evil ones“, adding that a witch or wizard is “a woman or man who is believed to have magic powers especially to do evil things”.

For incalculable centuries, people from different races, tribes, religions, and countries have expressed various beliefs in witchcraft activities. For instance, under the Mosaic Laws in the Bible, the penalty for practising witchcraft was death.

“A man or woman who is a medium or spiritist among you must be put to death. You are to stone them; their blood will be on their own heads” (Leviticus 20:27).

The Qur’an also classifies witchcraft under evil works such as the practising of magic.

"And from the evil of the witchcraft when they blow in the knots" [Suratul-Falaq 113:4]

Due to fears that people attach to witchcraft activities, people who are believed or suspected to be witches or wizards are treated with much revulsion in many Ghanaian societies.

I have been told by a spiritual person that most of the ‘powerful’ witches and wizards who occupy high ranks in their supernatural groups look very unkempt in the daytime. Witches and wizards are also believed to change into various animals  when they enter spiritual realms.

There is an interesting story about a team of well-acclaimed witches from a certain community in the country who travelled  with a spiritual jet overseas on a spiritual mission. On their way back, they were involved in an accident due to excessive speeding. Don’t laugh! It is a belief.

On the television and radio stations we see and hear self-acclaimed witches and wizards. The myth and beliefs about witchcraft are inestimable.

To probe further into witchcraft, I visited the Gnaani Witches’ Camp in the Yendi Municipal Area in the Northern Region.  Until my visit to the camp, I thought the camp was one big house accommodating all the alleged witches and wizards. I was wrong! It is actually a community on its own. The camp is about 300 metres away from Gnaani.

Most of the camp’s inmates looked old, pale and unhealthy and some had sores on their legs and feet. Some of the inmates slept on the  bare floor because they did not have mats or mattresses, while others slept on dismantled cartons. Both old and young people live at the camp. 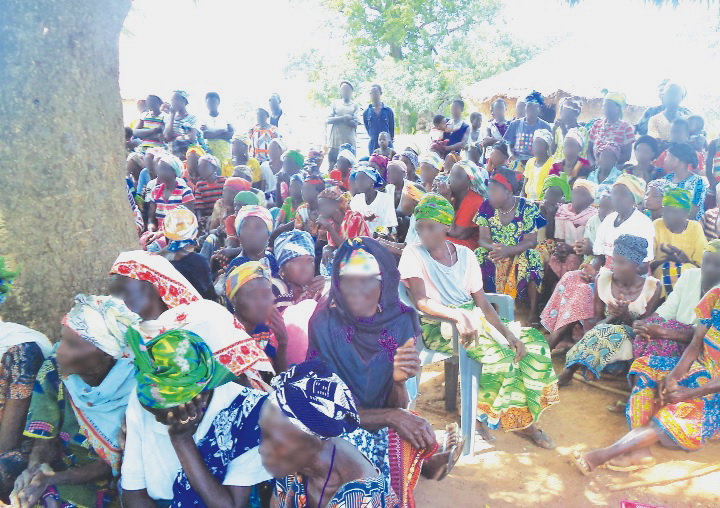 Narrating the history of the Gnaani Witches Camp to the Daily Graphic, Mr Joseph Shei Dawuni, who spoke on behalf of the Gnaani Tindana (owner of the witches camp), said in the olden days, one of their ancestors who was a hunter came across a shrine while on a hunting expedition.

He said the hunter settled in the area where he found the shrine and worshipped there.

Mr Dawuni explained that one of the sisters of the hunter, who was married and lived in a nearby village, was accused of being a witch. Thunter requested that his sister be brought to his shrine for some rituals to be performed to ascertain whether she was a witch or not.

Mr Dawuni said the rituals cleared his sister of the charge against her but due to the humiliation she had suffered earlier, she decided to stay with her brother at  the shrine.

He said with time, others who were also accused of witchcraft and brought to the shrine for the rituals refused to go home, resulting in the establishment of the witches camp.

He said when someone was accused of witchcraft, the person would be sent to the shrine for a ‘witchcraft test’ to prove their innocence or otherwise. He explained that it was the accused person who bought the items needed for the rituals, including alcoholic drinks and a fowl. The rituals usually took 25 to 30 minutes, depending on how cooperative the accused was.

According to him, “If you willingly confess before the sacrifice is performed, you can live, but if you do not confess and the rituals find you guilty of witchcraft, you can die afterwards”.

He indicated that after the sacrifice, most of those found guilty of witchcraft chose to live at the camp.

Mr Dawuni said until a person was delivered from witchcraft, he or she could be dangerous spiritually.

“Some are really harmful.  They can place sickness on you spiritually or cause many bad things to happen to you,” he said.

The man with spiritual wisdom said people could protect themselves against the witchcraft powers by not meddling in other people’s affairs, fighting over inheritance, having clear conscience and not eating unadvisedly.

Revealing how people acquire witchcraft, Mr Dawuni said money rituals, inheritance, ancestral curses or refusal to perform prescribed rituals to a deity one had gone for, could lead to acquiring witchcraft. He also said people could be witches or wizards without knowing it.

Ms Joyce Mensah, a level 400 student at the Communications Studies Department of the University of Cape Coast (UCC), said she believed in the existence of witchcraft and suggested that the name of the witches camp be changed to “the home for the elderly” to eradicate the stigmatisation of the inmates.

Mr Louis Mensah, a journalist, said “I believe any imaginary thing that is associated with life because anything with a name exists”.

In an interview, Pastor Abraham Gaisie, the General Overseer of Christ’s Church Universal (CCU), said God hated witchcraft and that “it is not spiritually acceptable to practise witchcraft”.

He expressed worry about how people accused of witchcraft were abused physically and sent to the witches camps.

“Spirits do not die and so even if you kill the witch, you haven’t killed the witchcraft,” he stated.

Pastor Gaisie, however, said no spiritualist could deliver someone from witchcraft unless the person was filled with the Holy Spirit.

In the Islamic perspective, Sheikh Habib Adabiya, an Islamic Scholar in Tamale, quoted Suratul-Falaq 113:4 and said it   referred to the practitioners of witchcraft and added that “if witchcraft was not real, Allah would not have commanded us to seek refuge from it”.