No bad blood: Stonebwoy meets up with Sarkodie's manager Angel 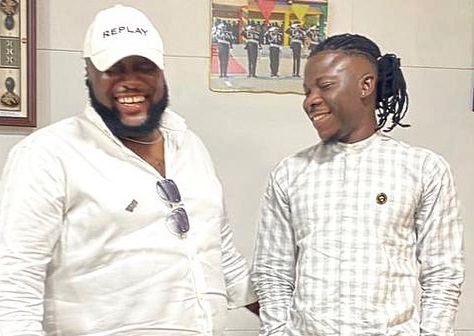 After apologising for hitting Angel, the manager of rapper Sarkodie, Dancehall artiste Stonebwoy has done one better by paying him a visit.

On Wednesday, August 19, Stonebwoy posted a picture of him and a smiling Angel with the caption "It’s All LOVE On This Side. Earlier Today w/ Angello.. No Bad Blood 🩸."

It’s All LOVE On This Side. Earlier Today w/ Angello.. No Bad Blood 🩸


At the pre-recording of Sarkodie's Black Love concert last week at the Independence Square in Accra, Stonebwoy hit Angel during a misunderstanding. Angel was injured in the eye and had to seek treatment at the hospital.

The misunderstanding occurred because of what Stonebwoy considered poor treatment by the Sarkodie's handlers. He felt disrespected that he was not allowed to park at a certain spot at the venue but his rival turned friend, Shatta Wale, was allowed to.

Also, even though he had been at the venue for hours, Shatta Wale was allowed to perform ahead of him and he was not happy with that.

Stonebwoy left without recording his session which put him out of the Black Love concert. Last Friday, he issued an apology to Angel and extended it to Sarkodie.

He also clarified that no guns or knives were pulled during the misunderstanding and urged his fans to disregard social media reports.

Stonebwoy visited Angel with his wife Dr Louisa Satekla and it is safe to say there is no bad blood between them.