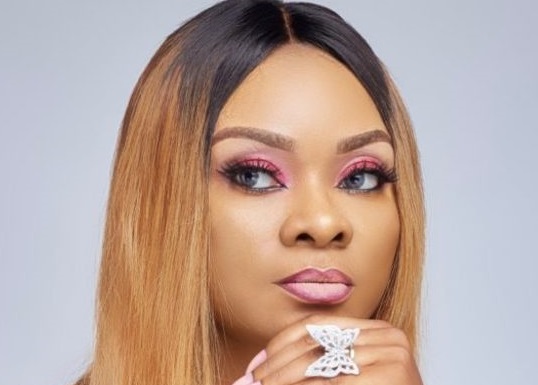 Actress Beverly Afaglo is counting her losses after fire razed down her house in Tema on Monday, August 9, destroying property worth millions of cedis.

The unfortunate incident apparently happened when Beverly who is married to Eugene Baah popularly known as Choirmaster, a member of Hiplife group Praye, and her family were not at home.

In a video she posted on Instagram, she wrote that the fire raged for about four hours and she had lost everything, except the clothes on her back, to the fire adding that she did not know where to start from.

She wrote, "My house burnt down to ashes within 4hrs ...... Everything gone, my passports, clothes, shoes, bags, wigs, jewelry, perfumes, my furniture, my kitchen everything gone 😭😭😭😭😭😭😭😭😭😭 My kids room and all their clothes everything is gone. I’m left with what I wore out that’s all. Thank God there are no casualties but where do I start from? 😭😭😭😭😭😭😭😭."

In another post, she wrote that even though the fire service responded on time, they were not able to get into the house for over 40 minutes because of the heavy smoke so nothing was salvaged.

"The fire service got in on time but over 40mins they couldnt go inside because of the heavy smoke (I was wondering why they don’t have protective gears for smoke. Why are they not well equipped 😢 gosh) they stood there deliberating and another came and that was the worse, they had to use a generator but it couldn’t start which also took awhile, then another came which went thru a nieghbours house to the back of the house and started putting off the fire but it was too late 😭😭😭😭😭😭😭😭😭😭 My mum, the kids nanny, the kids and I are all left with nothing 😭😭😭😭😭😭😭
This country let’s stop doing partisan politics and set our priorities right and stop the misplaced priorities. Ghana hmmmmmm," she stated.

Many celebrities and her followers all commiserated with her on the disaster, asking her to hope for better days.

For now, the cause of the fire has not been made known by the Ghana National Fire Service.