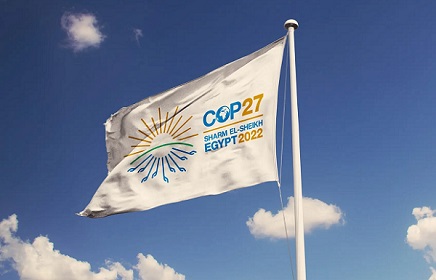 The world converged on the Egyptian resort city of Sharm El-Sheikh for the 27th United Nations Climate Change Conference (COP27) on November 7, with over 100 Heads of State and Government in attendance.

The Heads of State were joined by about 45,000 delegates from diverse backgrounds in the search for solutions to the climate crisis.

The political authorities, power blocs, climate experts, negotiators and other stakeholders at the conference will come up with concrete decisions on how to save people and the planet from the increasingly warming planet.

Described as “the Implementation COP", the summit is expected to harmonise competing interests into a common agenda that will accelerate action to address the menace.

Ahead of the event, experts in the climate change space had predicted that providing funding to avert, minimise and address loss and damage associated with the adverse effects of the climate crisis would be a make-or-break issue.


Also, a consortium of civil society organisations (CSOs) from Africa, known as the Pan-African Climate Justice Alliance, had strongly advocated that financing adaptation, loss and damage and honouring climate finance pledges, participation and inclusion be made pertinent for COP27 to be successful.

So far, the crux of issues at the conference had centred on six thematic areas — just transitions, food security, innovative finance for climate and development, investing in the future of energy, water security and climate change and the sustainability of vulnerable communities.

Despite the launch of these initiatives, the issue of climate financing, especially the payment of loss and damage to least developed countries that are heavily impacted by the climate crisis, remains a thorny one.

The African Group of Negotiators have demanded that the G20 countries deliver on the $100 billion a year pledge that was yet to be honoured.

These leadership responsibilities imposed on our eminent compatriots means that Ghana has a big role to lead the process of finding solutions to the global climate crisis.

It further entrusts a huge responsibility on our leaders to make a case for Africa, especially so when the African Group of Negotiators is pushing for the continent to be treated as one with "special needs".

The responsibilities entrusted on them are even more onerous, given that Ghana and other countries are demanding compensation for losses and damage associated with climate change.
The Daily Graphic acknowledges that although Africa's four per cent contribution to global greenhouse emissions is negligible, African countries are most vulnerable in terms of the impact of climate change.
It is in the light of this that we support the position that the big global polluters or contributors to global greenhouse emissions must fulfill their pledges to finance climate action in least developed countries.
The developed countries must do this as a moral responsibility, irrespective of the humanitarian aid they carry out in Africa and other least developed countries.
The Daily Graphic believes that while the developed countries have the moral responsibility to finance climate action in least developed countries, there must be conscious efforts by Africa leaders to implement adaptation and mitigation measures to address the crisis.
The Green Ghana Project that saw the planting of some 31 million tree seedlings in two years is a great initiative that must be encouraged as we take steps to create more carbon sink and prevent the globe from warming.
Additionally, it is important for collective action to be taken to halt illegal mining activities that destroy vast tracts of land and forest reserves.
We are also of the view that after 27 years of declarations and commitments at such conferences, the time has come for world leaders to translate words into action. There is no more room for talk shops. We must walk the talk to save the world from the climate crisis.