The making of the ‘Chairman General’ 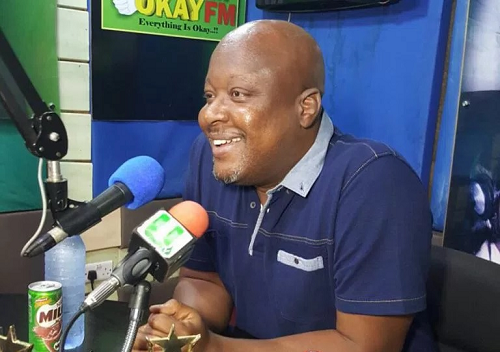 Kwame Sefa Kayi, popularly referred to as the ‘Chairman General’, is one of the best broadcasters and master of ceremonies the country has ever produced.

Considering how good he is at his job, one would have thought broadcasting was his dream job growing up, but appearing on the ‘Engine Room’ series on the Springboard Your Virtual University, he said he had always dreamt of being a military man at his early ages.

For someone who so badly wanted to join the military at an early age, the name Chairman ‘General’ could not have been less appropriate.

“Growing up, I never imagined I would do this. I grew up in a military establishment and looking back, I think I was subtly influenced by my mother to do this,” he stated.

He said his mother was a broadcaster and it was very normal to turn the radio and hear her voice all the time.

“I kind of took it for granted and probably didn’t know that I was being influenced slowly,” he noted.

First encounter with the microphone

Mr Sefa Kayi said he had his first encounter with the microphone at the age of 10 when he followed his mum to work one day.

“At age 10, I went to work with my mother and there was this man called George Crabbe who was a big voice on GBC radio those days. He put me on his laps and asked me a few questions on air, which I responded to.

“Sometimes I look back and think, I was probably getting my first lessons with the microphone without realising it,” he said.

“Doing the microphone was not my preference, I grew up in a military establishment, my father was an army officer and a typical boy, normally your first hero is your dad. So for me, growing up, it was always about the military and as far as I was concerned, it was about making an entry into the military academy because that was what I wanted.

“But my mother played some trick that turned out to be who I am today,” he explained.

He said after his national service in 1991, his next move was to enter the military academy to begin his military journey, but as fate would have it, his mother was not in support of that idea.

“My mother also had other ideas and did not want me to join the military. I had a flair for writing and I was a bit of a class clown and a talkative. I used to write short stories and create this kind of scenarios and gather the kids and stage a play.

“I came back from national service, 21-years-old, hot headed and my mother will just ask me very calmly and talk to me about career opportunities. She told me to pursue a career in writing or broadcasting but I declined because I was bent on joining the military,” he narrated.

The renowned broadcaster said his mum continued to break him slowly to consider her suggestion.

“Normally after morning devotion, her favourite verse that has remained with me till now was to honour thy father and mother so that your days may prolong and will tell me to pay a listening ear to whatever my parents say.

“She saw a bigger and different picture that I was refusing to see so slowly she navigated me a bit towards that,” he noted.

“So I got involved in acting, drama and theatre and as we were going through that, slowly, I started enjoying the attention. Then I did Ultimate Paradise which easily was the biggest television show at the time.

“I became immersed in it and because it was a general GBC environment, I also got interested in radio and one person I always give credit for giving me my first radio lessons was Ekow Buduman. I was his follow back and production assistant. He was the first person who sat me down in a production studio for radio and showed me a few of the tricks and helped me with how to speak into a microphone and started giving me assignments,” he stated.

He said that was how his broadcasting life began.

Mr Sefa Kayi pointed out that mentoring was an important part of every career.

“Some of us did not get that kind of mentorship or role models to sit us down. Most of the times, our role models were people we saw from afar so we just simply admired them and wanted to be like them from very far off.

“We didn’t hear them speak to us, understand their story, hear about their journey, their successes, failures, turning points and the decisions they had to make and why they made them, and the regrets,” he noted.

He said if he had got the opportunity of being mentored by some of his role models, he would have probably been more prepared to face the obstacles he faced at the early stages of his career.