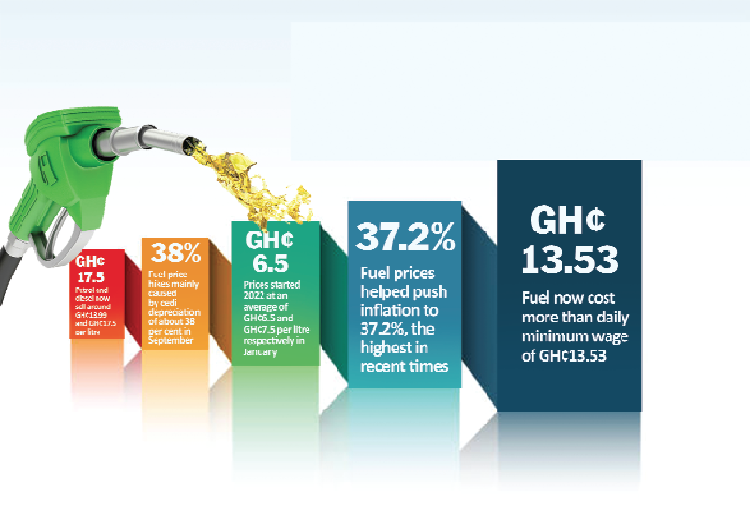 A litre of petrol and diesel at the pumps now cost more than the daily minimum wage. This is the latest twist to the soaring cost of living crisis facing citizens and businesses in the country.

Petrol and diesel prices climbed up to an average of GH¢13.99 and GH¢17.5 a litre respectively yesterday, October 31 – above the GH¢13.53 per day that the country’s labour law requires employers to pay an employee as the minimum wage.

The latest price came after oil marketing companies (OMCs) raised prices twice in the second pricing window of October in the wake of rising crude oil prices on the international market and the weakening of the cedi against the US dollar and other currencies.

A Graphic Business analysis showed that the ex-pump prices of petrol and diesel have now gone up by more than 107 per cent and 133 per cent respectively between January and October 28 this year – the highest jump in history.

Petrol and diesel opened the year at an average of GH¢6.5 and GH¢7.5 per litre respectively.

Prices of other refined petroleum products, including liquefied petroleum gas (LPG) and premix fuel, have also endured similar increases at the pumps, in an excruciating run that has culminated in a drastic rise in inflation to an all-time high and deepened the woes of businesses and citizens.


The Chamber of Petroleum Consumers (COPEC) told the Graphic Business on October 30, that it expected the prices to shoot up further in November.

It said its estimates showed that a litre of petrol and diesel will cost between GH¢14.08 and GH¢19 respectively in this month’s first pricing window.

The Executive Secretary of the COPEC, Duncan Amoah, said in an interview that the latest increment was purely the result of foreign exchange discrepancies, warning that “there was no end in sight” unless something significant was done.

For the current trend in pricing to reverse, Mr Amoah said, “the whole deregulation programme will have to be cancelled aside from fixing the forex issue.”

The policy was introduced in 2015 in response to rising subsidies and under recoveries that were weighing heavily on the public purse.

It allows OMCs the opportunity to set their own prices based on market forces.

Following its introduction, the policy has been hailed as a force for good for price discovery and competition in the largely choked OMC subsector.

Mr Amoah of the COPEC, however, said beyond doing away with subsidies, the policy has worked against the average Ghanaian.

“Deregulation affords the country to cut out subsidies or under recoveries.

It is also hopeful that it will engender competition to drive prices downwards but that has not happened,” he said.

He said the three determinants of price changes – foreign exchange, crude oil prices and taxes – were more inclined to increases than reduction, making the policy a force for consumers.

“The tendency for these to go up is very high and that means fuel price is set for the consumer to always pay more.

But we can be more efficient in setting our own prices, especially if we take politics out of it,” he said.

The Executive Secretary of the COPEC called for a petroleum board to be in charge of the import and setting of prices of refined petroleum products.

“There should be a petroleum board, which takes bids for import of products from the current market players.

“Then the board can decide which bid is better and which one supplies.

A commodity as essential as petroleum is not good to be left to the capital market and that is why we should move away from the deregulation thing,” Mr Amoah added.

An economic researcher, Dr Said Boakye, told the Graphic Business in an interview that the situation was heartbreaking but said there was an urgent need for calm among the citizens.

“Consumers are in real trouble but they should not panic. For businesses, they should just try to break even and keep their firms in operation while we wait for the negotiations with the International Monetary Fund (IMF) to be concluded,” the Head of Research at the Institute for Fiscal Studies (IFS) said.

Dr Boakye said the rising fuel prices had slipped out of control as the cedi continued to weaken against the US dollar.

“It is not crude oil price that is pushing the ex-pump price up; it is the exchange rate. So, the recent price increases are domestically orchestrated,” he added.

Meanwhile, in his October 30 address to the nation, President Nana Addo Dankwa Akufo-Addo, observed that the fuel price hike was now alarming but said measures to address it were underway.

“I know that the increasing cost of living is the number one concern for all of us. It is driven by fast escalating fuel prices at the pumps, which is caused by high crude oil prices on the world market and our depreciated currency.”

“I know that this is putting intolerable pressure on families and businesses. I know that people are being driven to make choices they should not have to make, and I know that it has led to the devaluation of capital by traders and painfully accumulated savings.”

“The government is working to secure reliable and regular sources of affordable petroleum products for the Ghanaian market.

“It is expected that this arrangement, when successful, coupled with a stable currency will halt the escalation of fuel prices and bring relief to us all,” President Akufo-Addo said.