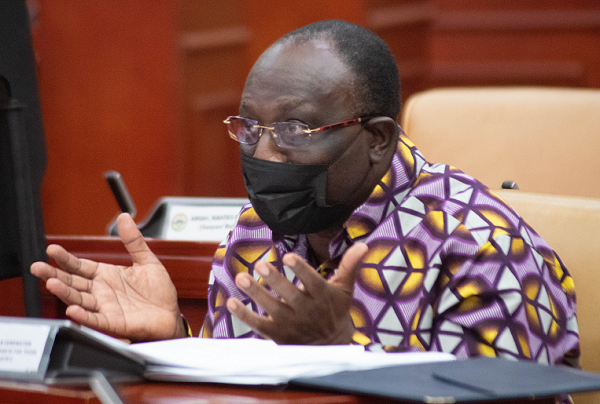 The Minister designate for Trade and Industry, Mr Alan Kyerematen, has admitted that the abuse of provisions in the Ghana Investment Promotion Council (GIPC) Act which governs retail trade in the country was creating tension between the Ghana Union of Traders Association (GUTA) and foreigners in the sector.

He said there were provisions in the Act that specifically made certain activities in the retail trade the preserve of Ghanaians.

However, he said, the lack of enforcement of the provisions had allowed the rift between GUTA and foreigners in the retail trade in the country to continue.

Mr Kyerematen made the assertion when he appeared before the Appointments Committee last Friday. He said beyond the provisions in the GIPC Act, there were also several provisions in different laws that had to be respected by both Ghanaians and foreigners who wanted to engage in the retail trade.

“What has occurred is that laws regulating the retail sector are being abused. Be they immigration laws, laws relating to revenue or regulations in respect of business operating licenses which fall under the authority of metropolitan and district assemblies.

“We cannot have a situation in our country where people disobey laws established by regulatory authorities and then turn around to find fault when the same rules are being violated by foreigners,” he said.

Mr Kyerematen was answering a question raised by the Member of Parliament (MP) for Odododiodioo, Nii Lante Vanderpuye, about the invasion of the country’s retail market by foreigners and which had resulted in conflict between GUTA and foreigners traders.

He said foreigners were today taking advantage of the GIPC law through marriage to Ghanaians as means to securing shops in the retail market space and to avoid scrutiny by GUTA and the regulatory institutions.

When pressed as to what action the ministry was going to take to ensure that the protocols in the retail trade were respected and reserved for indigenes, Mr Kyterematen said the issue of foreigners in domestic retail trade was obviously a vexed matter that had existed for decades.

He said it was because of the tensions that had arisen within the sector that the government had had consultation with various countries and at the level of ECOWAS to seek redress.

“We have agreed that foreigners who want to engage in retail trade in Ghana must go by the laws of the country. I know that issues have been raised in respect of conflicts between provisions in the ECOWAS protocol and our domestic law.

“In order to ensure that we maintain our long-standing bonds of friendship and economic engagement, particularly with our neighbours in West Africa, we have taken a position that in all cases where there are violations of the provisions, we must engage and consult with each other rather than take arbitrary actions,” he said.

He added: “Under the leadership of our President, there has been consultations and engagements by the Ministry of Trade and Industry and that is what has made it possible to bring tension down.”

With regard to encroachment of the 1,090 acres of land that was given to the Free Zone Board (FZB) in 2002, Mr Kyerematen acknowledged that the problem of land encroachments did not only pertain to that of the FZB but also to other government acquired land banks nationwide.

He suggested the need to accelerate development of the FZB sites to ward off encroachers.

He said the initiative which would be supported by the private sector would see the Ejisu Free Zone land being incorporated into a new project called Greater Kumasi Industrial City Economic Zone which would be located on a 4,500-acre land at Ejisu.

“This is going to be the next major industrial enclave after Tema”, adding that the location was strategic since the Ashanti Region was easily connected to the Greater Accra, Western North, Central and Eastern regions.

“It Is also the transit corridor to the Sahelian countries and so we cannot be concentrating our industrial agenda only in Accra and Tema,” he said.

He said engineering studies, drawings as well as site and assessment plans had already been done on the project.