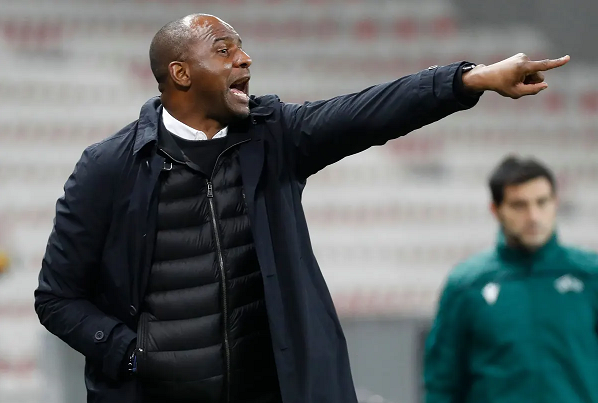 Police and the Football Association are investigating after Crystal Palace boss Patrick Vieira was involved in an altercation with a fan following their Premier League defeat at Everton.

Television footage showed him being taunted by an Everton supporter as fans ran onto the pitch at full-time.

The Frenchman appeared to kick out at the fan before being ushered away by other supporters.

Police say they have not received a formal complaint about the incident.

"Merseyside Police is investigating an altercation on the pitch at Goodison Park following the Everton v Crystal Palace match on Thursday," the force said in a statement.

"We are working with Everton to gather all available CCTV footage and are speaking to witnesses.

"No formal complaint has been received and enquiries into the incident are ongoing."

Everton staged a stunning comeback to win and retain their top-flight status.

"I have nothing to say about that," Vieira said when asked about the incident during his post-match news conference.

Everton manager Frank Lampard said: "I feel for Patrick. I didn't get him at the end. I would have said, 'come in with us' - although he might not have wanted that.

"Of course he ran 80 yards across the pitch and it's not easy."

A Crystal Palace source told BBC Sport that the security was a "joke" and that striker Christian Benteke was "slapped" during the first, smaller pitch invasion that followed Everton's third goal.

The source said: "At the end of the game they [the fans] were goading players and staff which is unacceptable.

"Is it going to take another Billy Sharp incident or worse before people say fans shouldn't be allowed on the pitch?"

The source also claimed that Palace boss Vieira told the officials it "wasn't safe" after the first pitch invasion - but despite those "warning signs" the away team was "left to their own devices" to get off the pitch.

On the pitch invasion, Lampard added: "It was pure elation of fans who have come on the pitch after avoiding relegation.

"If it is done in the right way let them stay on the pitch, let them have their moment. As long as they behave, no problem."

Speaking on Sky Sports, former England striker Dion Dublin said: "We know how overjoyed the Everton fans are but you can't be doing that. You can't be pushing managers and pushing players, touching players and shouting in their faces.

"We know it is only one or two who spoiled it for everyone else. Having fans on the pitch is not the way forward. We need to stop letting fans, or allowing fans to get on the pitch. It is too dangerous."

The other League Two semi-final, played on Wednesday, also ended in a pitch invasion with Mansfield boss Nigel Clough saying such incidents are "getting concerning" after his player Jordan Bowery appeared to be shoved by a fan late on in their win at Northampton.

Earlier on Thursday, a fan was jailed after running on to the pitch and headbutting Sheffield United captain Billy Sharp at the end of the Blades' Championship play-off semi-final shootout defeat by Nottingham Forest on Tuesday.