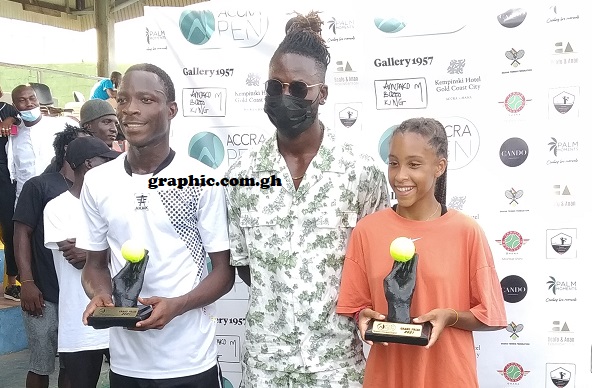 Samuel Antwi and Akua Akoma Hansen defeated their opponents in straight sets to claim the respective Men's and Ladies titles of the 2021 Accra Open Championship held at the tennis arena of the Accra Sports Stadium on Saturday.

In the first final of the day which was played before a packed arena, 13-year-old Hansen displayed poise and technique which belied her years on the way to a comfortable win over her experienced opponent Cruickshank.

Hansen dominated all the rallies in the game from the baseline and her opponent managed most of her points when she rushed the net or when the youngster made some unforced errors.

It was the second time that Hansen was defeating Cruickshank in a final after she won the Ladies Challenger Series IV title against the same opponent a fortnight ago.

In the men's final, Antwi, a National Service Person at the Koforidua Ghana Highways Authority won the first two sets but was pegged back by Golden Rackets star Fumi who was on the verge of forcing a tie break but his opponent closed out the first set.

The second set was a much more straightforward affair with the 19-year-old romping to a comfortable 6-1 score.

The competition which is in its second year is the brainchild of celebrated Ghanaian artist and tennis enthusiast Amoako Boafo and his Boafo and Anan Foundation with support from the Kempinski Hotel, Gallery 1957 and the RT Agency.