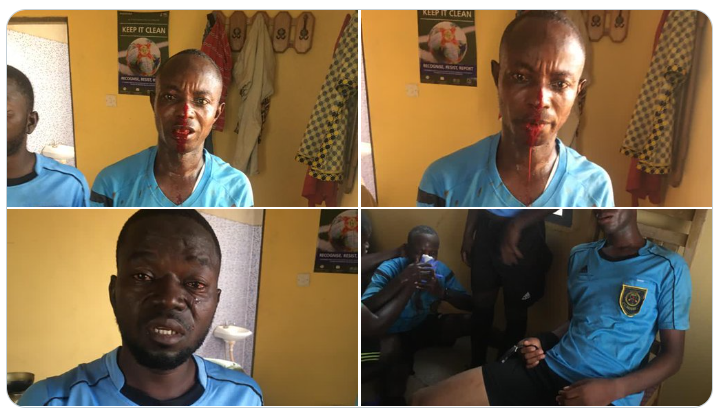 The Executive Council of the Ghana Football Association (GFA) has banned the Wamanafo Town park indefinitely with immediate effect after referees were assaulted at the venue after a Division One League match.

The ban comes a day after some referees were assaulted by fans of the home team Wamanafo Mighty Royals FC after a scoreless draw with Bofoakwa Tano FC on Sunday, March 28., 2021

The GFA in a letter to the club noted that the home team, Wamanafo also breached the GFA Approved Matchday COVID-19 Protocols.

The GFA in a statement also mentioned that its Competitions Department will now fix the venues for the upcoming home matches of Wamanafo with due regards to the distance to be travelled by the away teams.

Meanwhile, the GFA has tasked its Prosecutors to prefer charges against the team for the Disciplinary Committee "to sit on this matter expeditiously".

Below is the letter sent to the Club:

The recent meetings and seminars organised by the Ghana Football Association (GFA) with Club Chief Executive Officers and Club Safety and Security Officers on safety and security at the various stadia refers.

Again, last week another seminar on safety and security was organised by the GFA for clubs at which Senior CAF/FIFA Safety and Security Officer, David Van Vuuren from South Africa also shared continental experience and results with regards to the just ended CHAN tournament.

It is against this background of the efforts invested into promoting safety and security at our matches that the Association is shocked and extremely alarmed at the criminal assaults on the Referees at Wamanafo by the home supporters in the Division One League match between Wamanafo Mighty Royals FC and Tano Bofoakwa FC on Sunday, March 28, 2021.

Again, considering the fact that the Association has a process for complaining about any alleged bad officiating and a redress through the Match Review Panel, the Executive Council of the Association see any attack on the Match Officials as “an attack against the entire sport, it being, unwarranted and criminal”.

The Executive Council has accordingly exercised its powers under Article 14(2) of the Division One League Regulations and has ban the venue indefinitely.

14(2) “The GFA may order the closure of any league centre/venue where the safety of clubs, match officials and/or spectators cannot be guaranteed”.

The GFA also notes that the home team, Wamanafo Mighty Royals FC allowed fans into the park and also the inner perimeter and condemns, without any reservations, the violations of the GFA Approved Matchday COVID-19 Protocols which took place at the match.

The GFA Prosecutors have been tasked to prefer the appropriate Charges immediately and for the Disciplinary Committee to sit on this matter expeditiously.

The Association has instructed the Competitions Department to fix the venues for the upcoming home matches of Wamanafo Mighty Royals FC with due regards to the distance to be travelled by the away teams (note that matches can be fixed at the home of the away team if required).

That all clubs are to take note and comply strictly with the GFA Matchday COVID-19 Protocols.

The GFA wishes to sound a strong note of caution to all members (especially all clubs) that the slightest harassment or attack on Match Officials (Referees, Match Commissioners, GFA Cameramen & Women, Venue Media Officers) shall be dealt with severely and swiftly.