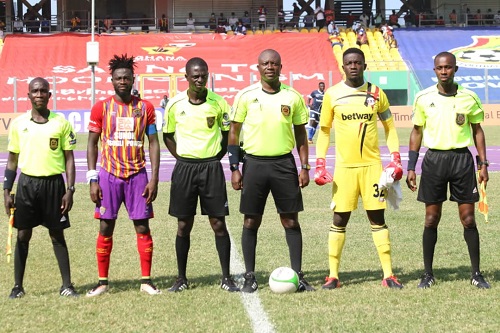 Officials who officiated the game between Hearts and Liberty
30.5k Shares

Referee Obed Kwegyah Danquah and Match Commission, Nii Adjiri Barnor, have both been charged by the Ghana Football Association for delaying their Matchday 33 game at the Accra Stadium.

The two officials were said to be complicit in ensuring that the game between Accra Hearts of Oak and Liberty Professionals was pushed forward instead of the agreed time of 3 pm.

The Disciplinary Committee of the Ghana Football Association said the referee and the Match Commissioner failed to offer any explanation in their match report on the reasons why the kickoff time was delayed.

GFA had earlier indicated that matches whose outcome will have bearing on the league title or relegation must be played on the same day with kick-off scheduled at exactly 3 pm.