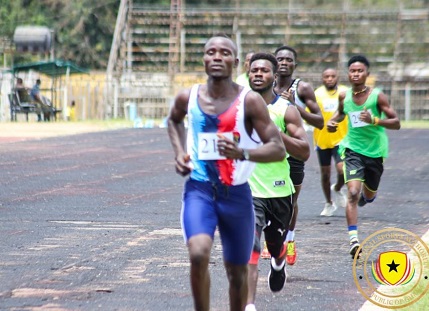 Some athletes competing in the 1500m race at the El-Wak Stadium
30.5k Shares

The Ghana Prisons Service (GPS), the GAF Potential and the University of Ghana placed second, third and fourth with 72 points, 51 points and 42.5 points respectively.

In the women’s category, the Ghana Armed Forces women’s team emerged tops with 46 points, while GAF Potential came second with 41 points, and Prisons and Police placed third and fourth with 40 and 14 points respectively.

The blue-ribbon event - the men’s 100m - witnessed a thrilling race which saw Augustine Smith Arkoh-Bawuah of GAF Team B winning in a time of 11.32 secs, while Musa Iddrisu from GAF crossed the finishing line in 11.81 secs. Richmond Opoku was third with a time of 11.83 secs.

In the women’s high jump final, Doreen Gagbah of GAF cleared the bar at 1.58m to win gold, beat Rebecca Aggrey of GAF Potential to second place with 1.53m. Prison’s Martha Wiafe came third with a jump of 1.53m.

In the women’s 200m final, Helina Carboo of GAF romped home with a time of 25.72 secs, pushing behind her was Stephanie Adu of GAF Potential with 26.76 secs, while Patricia Adu Amoah of Ghana Prisons came third with a time of 27.76 secs.

John Osei Kofi from GAF recorded a time of 22.50 secs to win the men’s 200m, ahead of teammate Michael Oduro who clocked 22.11 secs and third placed Frank Mensah from GAF Potential who finished in a time of 22.14 secs.

In the women’s 1,500m final, Julina Lariba Sakat from GAF Potential covered the distance in 4 mins 38.78 secs to win the race, while Rosina Titi of GAFcame second by making the time 4 mins 42 secs with Sarah Koomson from the Ghana Police Service arriving third in 4 mins 45.34 secs.

The men’s javelin throw was won by Benjamin Numo from GAF with a throw of 63.49m, while Mohammed Nafiu of GAF Potential threw 60.26m to place second, with Emmanuel Gyefa of Ghana Police placing third with a throw of 55.95m.