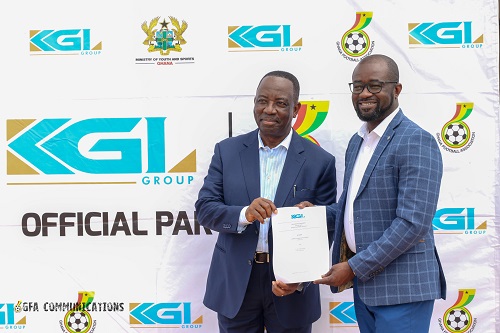 Juvenile football in the country received a major boost following an injection of $1million by KGL Foundation over the next five years.

As part of the $150,000 annual arrangement, each of the juvenile clubs is expected to receive 100 sets of jerseys and 100 sets of bibs for the next 5 years.

At the official signing ceremony, president of the Ghana Football Association (GFA), Kurt Okraku, sounded elated by KGL’s decision to venture into the support of juvenile football having committed to supporting the Black Stars in the past.

He said the support will go a long way to help young footballers who aspire to earn a career in football and disclosed that the GFA had already invested $100,000 to support the development of football at the regional level as well as buying of football for the juvenile clubs.

“Am super-excited that today we are announcing an amazing relationship between the GFA and KGL. KGL foundation gives hope to the hopeless and improves the capacity of young people.

“Today’s announcement offers amazing opportunities to our younger brothers who aspire to be big footballers in our country.

“Colts football had not been played in Ghana for years but thankfully we brought it back and across all the 10 regions juvenile is being played.

“The GFA invested about $100,000 into the development of football at the regional level in the purchase of football which are being used by juvenile clubs.”

“We also introduced the catch them young referees which is aimed at encouraging young persons with enormous passion for refereeing. So, this year all our juvenile matches are officiated by kids.”

“Beyond that we have reduced the burden on our colts’ clubs by scrapping the payment of referee fees”.