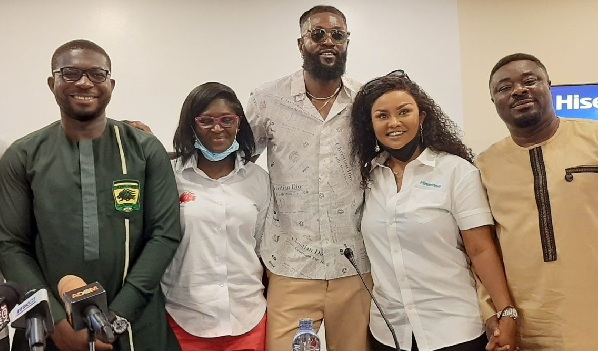 Ghana Premier League (GPL) giants Kumasi Asante Kotoko has unveiled an agreement with Hisense Ghana that will make the Chinese multinational electronics manufacturer its official electronic partner for the next three years.

Under the alliance which commences from the start of the 2020/2021 season, Kotoko will receive GH₵3million in cash and products from the electronics manufacturer.

Addressing a press briefing last Saturday in Accra, the Chief Executive Officer (CEO) of Kotoko, Nana Yaw Amponsah disclosed that per the agreement the club will receive the equivalent of GH₵1million in cash and products from Hisense for the next three seasons.

He also disclosed that Kotoko had already received GH₵500,000 from the Chinese firm before the start of the 2020/2021 GPL season.

Mr Amponsah said under the "mutually beneficial" partnership, Kotoko will also receive products worth GH₵230,000 to furnish its Adako Jachie training facility which is expected to be completed in December 2020. He added that in the years that Kotoko would not need the products, the Chinese partner had committed to converting the products into money.

He added that the partnership will also award GH₵5,000 to any opposing player who scores a winning goal against Kotoko in the GPL.

Explaining, the rationale behind that decision, Mr Amponsah said Hisense was confident that Kotoko would not lose any game because the same amount will inversely be disbursed among the Kotoko playing body for winning their matches.

Additionally, Hisense will also set aside GH₵5,000 worth of products each for Kotoko's Goal of the Month winner and its Fan of the Month competition.

He also urged fans to patronise Hisense products, assuring that registered Kotoko supporters will be due discounts on their purchases.

Expressing gratitude to Hisense, a board member of Kotoko, Mrs Evelyn Owusu praised the CEO for the efforts he has made in acquiring sponsors for the club. She was hopeful that the club would soon be among the best in the world under his stewardship.

In separate addresses, Hisense brand ambassadors actress Nana Ama McBrown and former Arsenal star Sheyi Emmanuel Adebayor were hopeful that the success of the partnership would lead to an extension of the deal.

"I have seen a lot of sponsorships and partnerships around the world but what I am seeing here today is the first time I am seeing something like this in West Africa. Today there is a marriage between Hisense and Kotoko but we should focus on the future and explore ways to sustain this sponsorship for the next 15 years," Adebayor said.