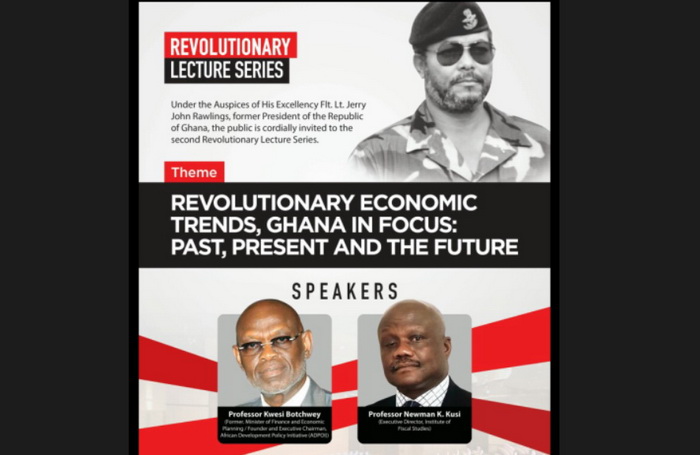 “The former President and Founder of the National Democratic Congress will attend the lectures to be delivered by Professors Kwesi Botchwey and Newman Kusi, as the Special Guest of Honour”, a statement from the office announced Wednesday.

It said the planning committee of the Lecture has also confirmed that former Vice-President, Paa Kwesi Amissah-Arthur will chair the event. “Amissah-Arthur is an economist, academic and former Deputy Finance Minister and later Governor of the Bank of Ghana.”

Other leading members of the National Democratic Congress, socialist groups, political partners, CSOs are expected to attend the event which commences at 2pm on Thursday, May 31 at the National Theatre, Accra.

Organized under the auspices of the office of Flt. Lt. Jerry John Rawlings, former President and founder of the NDC as part of activities marking the annual celebration of the June 4, 1979 uprising, this year's lecture is under the theme: Revolutionary Economic Trends, Ghana In Focus: Past Present And The Future.

Professor Botchwey will deliver a lecture on Ghana's economic and social situation prior to 1983. It will be followed by a review of the economic reforms from 1983 to 1992: Issues, Responses and Outcomes, with Professor Kusi speaking on Ghana's Economic Growth and Development in the Democratic Environment - Issues, Responses and Outcomes, and a rethinking of Ghana's development on a sustainable basis.

The lecture will precede a durbar of cadres and revolutionaries at the Madina Social Welfare School Park on Monday, June 4 at 10am. The durbar which will be addressed by the leader of the revolution, Flt. Lt. Jerry John Rawlings will be under the theme: Re¬organising Towards The Core Values.

“Both events are open to the public. Sympathisers of the June 4th uprising and the 31st December Revolution, workers, students, activists, civil society organisations and public-spirited persons are invited to attend the two events.”