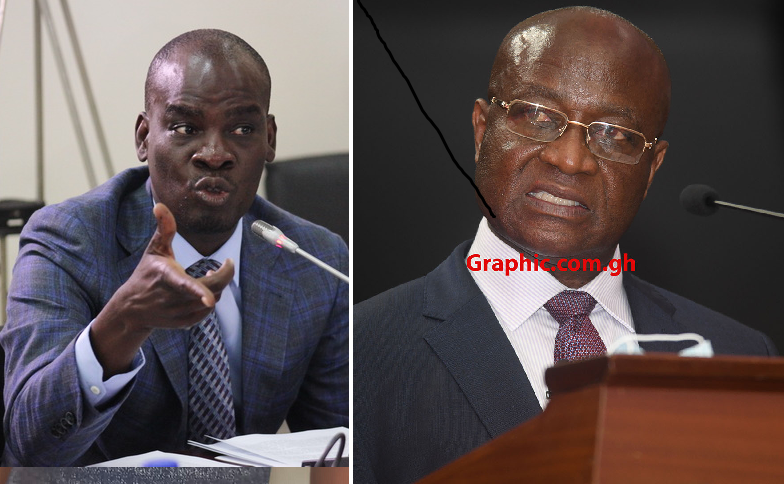 Proceedings this week in Parliament were overshadowed by a number of developments that appeared to offer some breathing space for both sides of the House in respect of the calls for the removal of the Minister of Finance, Ken Ofori-Atta.

This was in sharp contrast to previous attempts by some 80 plus Majority Members of Parliament (MPs) and their Minority colleagues.

Several issues came up during this week’s proceedings in Parliament that shifted the focus from the consensus to compel the President to sack the Minister of Finance.

At the beginning of sitting on Tuesday, the Majority, in response to the Minority’s motion on the vote of censure against Mr Ofori-Atta, attempted to revive the debate on the issue.


With the proceedings being presided over by the Second Deputy Speaker, Andrew Amoako Asiamah, the Majority advocated the need for the minister to be given the opportunity to be heard, either by himself or his lawyer, on allegations levelled against him.

The Deputy Majority Leader, Alexander Afenyo-Markin, said: “You cannot take away the right to fair hearing from a respondent”.

“So, Mr Speaker, my view is that we have a serious matter as censure and the applicants have not served the minister, neither have they served the basis on which they mounted their application,” he said.

The same day saw the Minority Leader, Haruna Iddrisu, expressing his determination to move a petition in Parliament to stop the Electoral Commission (EC) from using the Ghana card as the only evidence of citizenship for national elections.

He, however, deferred the moving of the advertised motion to allow for further consultations with civil society and the National Democratic Congress (NDC).

Soon after proceeding last Tuesday, the Minority held a press conference in which Mr Iddrisu criticised President Akufo-Addo for failing to accept responsibility for the “sorry and wrenched” state of the Ghanaian when he delivered his address on the state of the economy last Sunday.

The Minority Leader said the President did not admit being responsible for the bad economic decisions that had impacted harshly on livelihoods, exacerbated poverty and increased the cost of living.

Use revenue to cushion Ghanaians

On Wednesday, the Minority once again held a press conference in Parliament, alleging that the government made super normal profit from the Russia-Ukraine war, which it had failed to use to cushion Ghanaians against hikes in fuel prices.

The Ranking Member on the Mines and Energy Committee, John Jinapor, said in the 2022 budget, government projected to receive GH¢6 billion from the petroleum resources for the year but in less than three months, it received over GH¢8 billion.

"So, in three months, the government has received more than it has projected for the whole year," he said.

On Thursday, the Majority Leader, Osei Kyei-Mensah-Bonsu, during an engagement with the media, expressed uncertainty about the presentation of the 2023 Budget Statement and Economic policy to the House on November 15, 2022.

He, however, sounded optimistic that the budget would be able to meet the November 30 deadline as stipulated by the 1992 Constitution.

He blamed the situation on the current International Monetary Fund (IMF) engagement and the fact that the budget needed to be presented to Cabinet for possible additions and subtractions before coming to the House.

Addressing the issue of the calls by some 80 plus members of the Majority Caucus, the Majority Leader said the whole caucus now supported calls for the Finance Minister to resign.

“Even though the issue started with a group of 80-plus, the caucus meeting is aligned with the decision of that group.”

“So, it is no longer the cause of the 80-plus group. It is the agenda for the entire caucus,” Mr Kyei-Mensah-Bonsu said to journalists in Parliament.

On the issue of the renowned businessman who attempted to induce angry MPs to rescind their call for the Finance Minister’s dismissal, the Majority Leader assured that investigations would be conducted into the allegation.