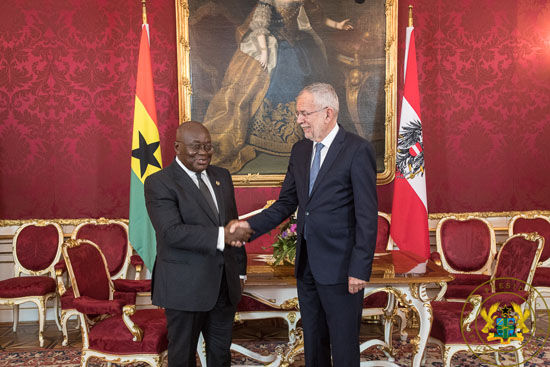 The President of Austria, Alexander Van der Bellen, has described Ghana as the most important destination in Africa currently for Austria and Austrian businesses.

According to President Alexander Van der Bellen, the management of the Ghanaian economy, especially over the last two years, for which Ghana is projected to be the fastest growing economy in the world in 2019, has made the country very attractive for investors from Austria.

The Austrian President made this known on Monday, May 27, 2019, when he held closed door bilateral discussions with the President of the Republic, Nana Addo Dankwa Akufo-Addo.

Welcoming the increasing participation of Austria businesses in Ghana's economy, President Akufo-Addo, who is also in Austria to participate in the R20 Austrian World Summit on Climate Change, urged Austrian firms invest in clean energy initiatives in Ghana.

On the fight against terrorism, and the increasing activities of terrorists in the Sahel, the President called for more support in aid of efforts by the African Union and the G5 du Sahel in combating the menace.

He stressed that “the co-ordination of activities between the armies and the intelligence agencies of our countries is absolutely essential to a successful battle against terrorism.”

Touching on the purpose for his presence at the R20 Summit, President Akufo-Addo assured his Austrian counterpart of Ghana’s preparedness to tackle the climate change phenomenon.

Climate change, the President stressed, is the biggest threat to the realisation of the SDGs, and has become an issue of grave concern to most leaders across the world, as it has considerable impact on the fundamentals required for the survival of the human race on earth, i.e. rise in sea levels, severe and extreme weather conditions, such as droughts, floods and erratic rainfall patterns, and growing desertification.

“It is in own interest to act to salvage the economic fortunes of the continent, and, more so, step up our collective efforts to fight decisively climate change,” he added. 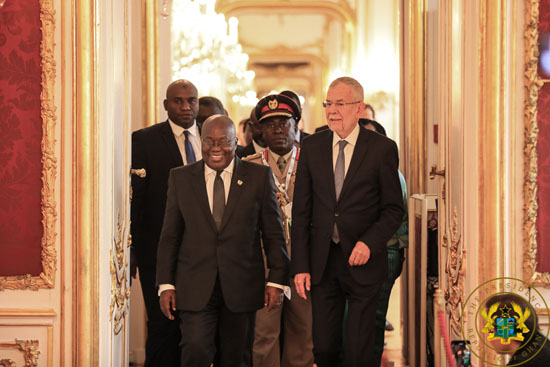 The President is in Austria to attend the R20 Austrian World Summit – an initiative which is helping regions, countries and cities to implement the United Nations Sustainable Development Goals (SDGs), and to meet the global climate protection targets outlined in the Paris Agreement.

He is attending the Summit in his capacity as co-Chair of the UN Secretary General’s Group of Eminent Advocates on the 2030 SDGs, and will, on Tuesday, 28th May, participate in the high-level panel discussion on the need for leadership to take responsibility in the global process on sustainable development and international co-operation.

Whilst in Austria, the President will also hold bilateral talks with the Austrian Chancellor, Sebastian Kurz; with the President of Hungary, His Excellency János Áder; and with the CEO of the World Bank, Kristalina Georgieva.

He is also expected to meet members of the Ghanaian community resident in Austria. 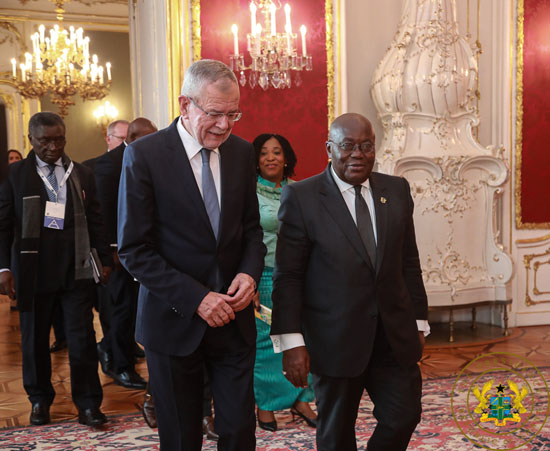 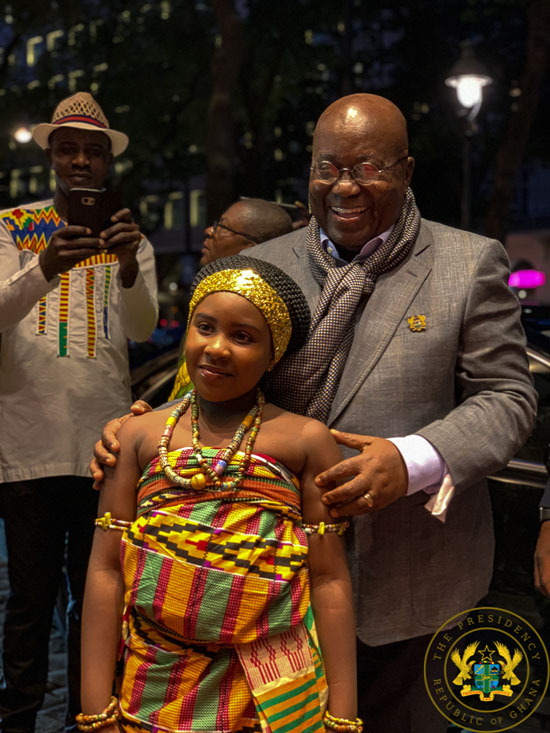