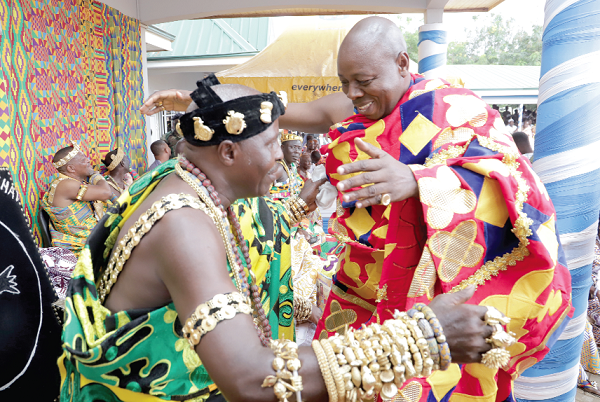 The Senior Asafoatse of the Shai Osudoku Traditional Area, Nene Teidjahene Korabo IV, has called on the youth of Manya Jorpanya in the Greater Accra Region to refrain from acts that bring disunity in the area.

Nene Korabo said that even though he had fought for the development of his people, there were few retrogressive characters who had vowed to derail the hard-earned achievements so far.

He, therefore, called on the youth to support him and his elders to stamp out such characters from the area and make Manya Jorpanya the beacon of hope for the people of the Shai Osudoku Traditional Area.

Making the call at the celebration of this year’s Ngmayem festival by the chiefs and people of Manya Jorpanya last Saturday, he said: “We have come from far and as a people with one destiny and one destination, we ought to be seen working as a team to achieve the same purpose.”

He further urged the youth to uphold the peace they were enjoying in the area and emulate such a gesture from their leader.

The festival was also used to mark the 24th anniversary of his enstoolment as the chief of the area.


The festival, which is celebrated annually, is aimed at harnessing great strides, bridging the gap between the rich and the poor, counting the achievements and ensuring ultimate peace among indigenes of Manya Jorpanya and surrounding communities.

The occasion was on the theme: “Upholding our cultural values after the COVID-19 Pandemic”.

Addressing a durbar to climax the festival, Nene Korabo commended the people of Manya Jorpanya for the discipline, dedication and exhibition of peace among themselves, which had become the subject of discussion by neighbouring communities.

“As a chief, who has the people at heart, I have made it my policy to uphold the principles and values of my forebears in high esteem and until each person is provided with basic amenities I will not rest,” he stated.

“In September each year, the chiefs, elders and the people of Manya Jorpanya ensure that we gather at a unique ground to share the achievements and put in place measures to keep us above and not below.

He said despite the challenges, much of his efforts were inspired by dedicated and dynamic family heads, subchiefs, queenmothers, opinion leaders and other citizens and he thanked them for their immense contributions towards the successful development in the area.

He appealed to residents of the area to rally behind their elders to make Manya Jorpanya a haven.

Speaking on behalf of the District Chief Executive (DCE) of the Shai Osudoku Area, Fred Ofei Twum, the Presiding Member of the area, Noah Sobutey, stated that the achievements of Nene Korabo had received a commendation from across the traditional area and attributed this to his selflessness, dedication to his core mandate and his openness and readiness to listen to everyone.

He, therefore, urged the youth to remain resolute and optimistic as the district continued to find ways and means to reduce unemployment and, therefore, reduce poverty in the area and in Ghana.

The Chief of Gomoa Dasum, Nana Obokomatta IX, said governance was a shared responsibility and as such even though traditional leaders had made frantic efforts to bring relief and development to their respective areas, it behoved politicians to be truthful and respect the views of the people.