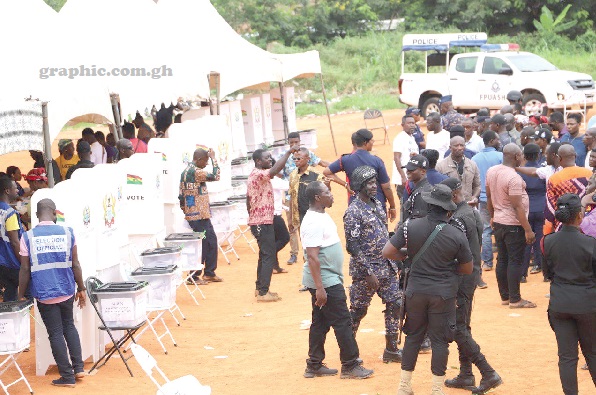 There were mixed developments at election centres when the New Patriotic Party (NPP) began its constituency elections across the country yesterday.

While the elections were generally peaceful in many of the constituencies, others experienced skirmishes, resulting in the delay of the process.

At places where there was tension, such as Okaikoi South in Accra, Yendi in the Northern Region and Subin in Kumasi, the police had to come in to restore law and order.

Indeed, at the Prince of Peace International School centre in Accra, aggrieved delegates and supporters disrupted the process for a long period of time.

At a point, they threw stones at the police who were trying to set the stage for the election to take place.

In Yendi, the election was suspended as a result of a dispute over which album to use.

The matter was subsequently referred to the party’s steering committee for redress.

At the Prince of Peace International School in the Okaikoi South Constituency, Juliet Akyaa Safo reports that voting could not start on time because some aggrieved people disrupted the process on the allegation that some 400 names had been deleted from the election register.

They massed up on the road and attempted to block a vehicle which was transporting officials of the Electoral Commission (EC) to the centre.

He gave an assurance that his men would police the electoral process in the region to the end to ensure peace.

The Okaikoi South Electoral Officer, David Chinery, said the process started after 10 a.m., instead of 9 .a.m, due to the chaos in the morning.

He said about 1,021 delegates converged on the centres to vote, noting that two polling centres were created to speed up the process.

He commended the police for their intervention.

“The police were able to shield me, even though I had some scratches on my car. The people were furious because they heard that some of the delegates’ names had been expunged from the album, but that wasn’t the case,” he said.

At the Sunny Side International School centre, the swapping of two candidates’ details on the ballot paper caused the election to start at 11:46 a.m., instead of 9 a.m.

According to the Okaikoi North Electoral Officer, Eunice Yeboah Quaye, the pictures and names of the Women’s Organiser and the Second Vice-Chairman were swapped on the ballot paper.

However, the anomaly was rectified with the printing of new ballot papers.

From Tema, Benjamin Xornam Glover reports that 1, 221 delegates in the Tema East Constituency converged on the premises of the Presbyterian Church of Ghana, Greenwich at Community One to elect new executives.

In all, 24 candidates contested for the various positions.

The Assistant Secretary and the Treasurer positions were contested unopposed.

Speaking with the Daily Graphic, the Chairman of the Tema East Constituency Election Committee, Adam Sabo Abdul-Rahman said the process was smooth.

From the Subin Constituency in Kumasi, Emmanuel Baah reports that 900 delegates cast their ballots.

According to the Subin Electoral Officer, Hildegard Ofori, the exercise was conducted at 170 polling centres in the 10 electoral areas in the constituency.

Polling delayed for about two hours while election officials awaited the arrival of more security persons following some misunderstanding at the centres.

The incumbent Constituency Chairman, Michael Adusei-Bonsu, and seven others maintained their positions.

Kwadwo Baffoe Donkor writes from Kumasi that the election in the Manhyia South Constituency passed peacefully, with Richard Adjei Mensah Ofori-Atta being elected unopposed as the new Constituency Chairman.

The position of First Vice-Chairman went to Seth Twumasi, who was also elected unopposed, while that of Second Vice-Chairman was won by Kingsley Kyeretwie Bonsu, who polled 388 votes as against 162 by Justice Anokye.

Haruna Alhassan retained his position as constituency secretary, polling 324 votes, as against 226 by Patricia Adutwumwaa.

After the new executives had been sworn in, Mr Ofori-Atta promised to resource the branch and also instill discipline in the party.

According to him, there would not be the imposition of a parliamentary candidate on the constituency, and that the rule of law would be the order of the day.

He urged all NPP members in the constituency to come together to work for the greater victory of the party.

The elections took off smoothly in all the 15 constituencies in the Upper East Region, reports Gilbert Mawuli Agbey.

Although there were a few delays to the start of the elections in some constituencies, in majority of them they started on time.

Heavy security was deployed to prevent any nasty situations.

In the Bolgatanga Central Constituency, 794 delegates were expected to take part in the elections.

The Municipal Electoral Officer, Mr Yaw Peprah, said the process was smooth and transparent, to the satisfaction of delegates.

Emmanuel Adu-Gyamerah & Biiya Mukusah Ali report that the elections in the Sunyani East and the Jaman South constituencies had been put on hold because of court actions.

The Dormaa East and the Berekum West constituencies will hold their elections today, while Jaman North and Berekum East will take their turn tomorrow, Saturday, and Sunday, respectively.

In the Wenchi Constituency, the enthusiasm to elect new constituency executives was high, as delegates defied a morning downpour to gather at the Wenchi Farming Institute to vote.