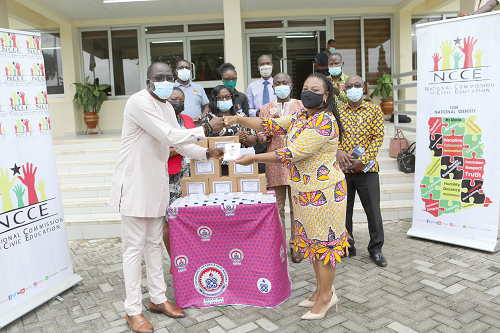 The Chairperson of the National Commission for Civic Education (NCCE), Ms Josephine Nkrumah, has underscored the importance of civic education campaigns in the growth and development of the country.

“As a nation, we must build the mindset of the people through civic education since it is the biggest and most effective tool for development”, she said and added that “we must invest in making the citizenry more discerning so that they will play their part towards the nation’s progress.

Ms Nkrumah was speaking at a brief ceremony at the University of Education, Winneba (UEW), when management of the university presented 200 pocket-size copies of the 1992 Constitution to the NCCE last Friday.

She stated that the political class should not only be interested in elections or winning the next election but should rather spend enough resources on civic education so that the citizenry would be discerning enough to be part of the governance of the country.

“Obviously, if Ghanaians are well-informed through civic education, it will enable the political class to select the right leaders with the vision and passion to govern the nation for the benefit of all,” she said.

Ms Nkrumah noted that the absence of an effective civic education campaign by the NCCE (due to logistical constraints) had led to a critical mass of the people losing hope in the leaders and the governance system and as a result not being able to put successive governments on their toes.

“Indeed, this is a worrying development which must be nipped in the bud in order for all Ghanaians to put their shoulders to the wheel to contribute their quota towards the growth and development of the nation,” she stated.

“The change we want to witness as a country must start from the youth through civic education so that they will grow up to play pivotal roles towards the transformation of the nation,” she added.

The Pro Vice-Chancellor of UEW, Professor Andy Ofori-Birikorang, who presented the copies, said although the NCCE had an important role to play in Ghana’s democratic dispensation, it had over the years been under-resourced by successive governments.