I touched many lives in prison — Abuga Pele 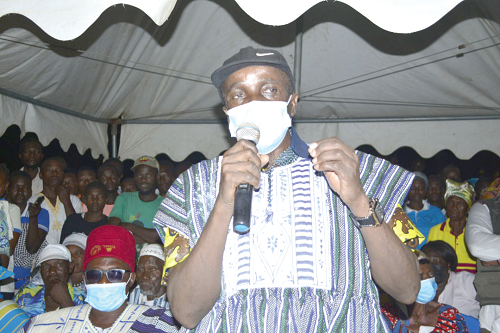 The former Member of Parliament for Chiana-Paga in the Upper East Region, Mr Abuga Pele says he has touched the lives of many people while serving a jail term at the Nsawam Prisons.

He said as painful as it was, he believed that like the Biblical story of Joseph, he was sent to prison for a purpose and “I thank God I was able to contribute a small aspect of love to those unfortunate souls,”  Mr Pele, the former National Coordinator of the defunct Ghana Youth Employment and Entrepreneurial Development Agency(GYEEDA) intimated.

Speaking at a special welcome ceremony for him at Nakolo, his hometown in the Kassena Nankana West District last Saturday, following his release as a result of a presidential pardon, he stressed, “I was not incarcerated, I was not put in prison.

“You are only put in prison if your mind accepts or allows it. I was taken there to learn. The people in prison are my younger brothers, my sisters and my fathers. Some of them needed help, maybe God sent me there to help them,” he explained.

Mr Pele indicated that while there, his background and experience invariably placed on him the responsibility of a headmaster for the inmates which enabled them to pursue their education from the secondary up to the tertiary level.

“I became the headmaster of the school that produced graduates, they do distance courses from Cape Coast. I was a coach for the young football team and I took the opportunity to entertain the whole prison” he stated.

Due to his encouragement and role, the number of inmates at the Nsawam Prisons who developed the interest to further their education through distance learning at the University of Cape Coast in the Central Region increased from about 153 to 300.

He further indicated that he was a coach for a young football team, thus his sentence to the Nsawam prisons was not a punishment but rather, a learning process.

Mr Pele and Philip Assibit, a businessman were sentenced to six years and 12 years in imprisonment respectively on February 23, 2018 for their involvement in a GH¢4.1 million GYEEDA scandal.

Mr Pele was, however, granted a presidential pardon on July 1, 2021, on health grounds after serving three years in jail.