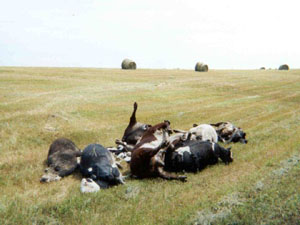 The Veterinary Services Department has placed a ban on the slaughtering and movement of animals at Zebilla in the Bawku West District in the Upper East Region due to an outbreak of Anthrax.

According to the Upper East Regional Director of the Veterinary Services Department, Dr Moses Agbordzi, the  disease had so far killed 30 cattle, 11 sheep and three donkeys at Gozongo.

He said a report in the media about the purported outbreak of Anthrax in the Bawku West District prompted the Regional Directorate of the Veterinary Services Department to send a team of investigators to ascertain the veracity of the story.

He said  another team from  Pong Tamale in the Northern Region joined  in the exercise during which it conducted extensive investigations, indicating that it was during the investigations that the death of a cow was reported and a sample taken from the carcass proved it died of Anthrax.

Dr Agbordzi said the Veterinary Services Department had started with the immediate treatment and vaccination of animals within the Gozongo catchment area, but expressed his frustration about the lukewarm attitude of farmers not availing themselves of the exercise as they had been complaining about the price of the vaccines.

He said the animals currently being vaccinated were cattle, donkeys, pigs, sheep and goats. The vaccination attracts a fee of GH¢1 and 50 pesewas.

The Regional Director also complained about inadequate staff, few motorbikes and lack of fuel to carry out the exercise.

He said the farmers lost their animals because their reporting system was not effective as they claimed they reported to a community volunteer and the medication given to some of their sick cows did not curtail the deaths.

He said the farmers should have reported to the District Veterinary Officer who would have informed the Regional Office for possible solutions to the deaths of the animals.

The Upper East Regional Disease Surveillance Officer of the Ministry of Health, Mr Thomas Abachie, who also spoke to the Daily Graphic, disputed the reported deaths of four people of Anthrax in the Gozongo area.

He said although the deaths occurred, they were not related to Anthrax.

He explained that Gozongo was a muslim community and so the people did not consume dead animals due to religious reasons.

He, however, advised them to report any dead animal to the nearest Veterinary Officer or the Environmental Health Officer.