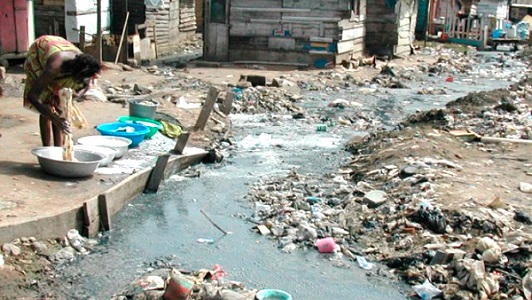 A fertile ground for cholera to strive Follow @Graphicgh

Cholera is one of the diseases that occurs due to poor environmental and food hygiene. It is a bacterial disease that leads to severe dehydration, and it usually spreads through contaminated water or food.

The bacterium that causes cholera is called vibrio cholerae. If left untreated, cholera can kill a person in a few days due to dehydration.

Empirical evidence at the disposal of the World Health Organisation (WHO) shows that the world records about four million cases of cholera yearly and the disease kills about 143,000 people each year across the globe.

One may infer that though cholera is a preventable disease, it is one of the major global threats to public health and it depicts inequity or lack of social development.

Mindful of the fact that cholera mostly spreads through contaminated water, provision of safe water and ensuring environmental sanitation are key to its prevention and controlling its spread, as well as the spread of other water-borne diseases.

Cholera is a very virulent water-borne disease that causes acute watery diarrhoea. It takes about 12 hours to 5 days for a person who contracts the disease to show symptoms.

Cholera affects both children and adults and as indicated earlier, an untreated cholera patient dies within a few hours due to severe dehydration resulting from the diarrhoea.

It, thus, behoves governments to provide accessible clean water and sanitation facilities for the citizenry.

In each cholera-endemic country, the typical risk areas are peri-urban slums and other areas where sanitation is very poor.

Cholera is medically treated with intravenous infusions, oral rehydration therapy and antibiotics. A person suffering from cholera must thus seek for treatment from a health facility.

There have been several cholera outbreaks in Ghana over the years and so, Ghana may be described as a cholera-endemic country.

An epidemiology surveillance carried out in Ghana from 1998 to 2017 revealed that Ghana recorded 82,754 cholera cases with 519 cholera deaths within the stipulated period.

The 2014 outbreak was widespread, affecting at the time, 130 out of the 216 districts across the 10 affected regions.

However, the most affected areas were the districts in southern Ghana. The Greater Accra Region, for example, is noted to be a cholera risk area, with Accra itself being the epicentre of cholera in the country.

Having realised that cholera spreads mostly through contaminated water, the heavy rains and flooding in most parts of the country, including Accra in recent times, is worrisome.

This is because environmental sanitation in certain parts of Accra is so poor that, but for sheer luck, cholera should have been a daily occurrence.

Both food hygiene and water safety have been seriously compromised in some parts of Accra. The poor environmental conditions in most parts of the city which lead to the perennial flooding that kills and displaces people and domestic animals have often turned the rains from being a blessing into a curse.

This is because, aside from the fact that the flooding displaces people and domestic animals and kills some of them, it spreads waterborne diseases such as cholera.

With the rains causing flooding in Accra, a cholera-prone city, if care is not taken, we will have another escalating health problem on our hands. Public health experts need to begin a nationwide campaign on cholera prevention.

Accordingly, communities at risk need to be sensitised and equipped with preventive information and services including emphasis on appropriate hygiene practices such as hand washing with soap, safe preparation and storage of food and breastfeeding.

Such a campaign is much needed to prevent an occurrence of a fatal outbreak, especially in the wake of the rains and flooding in many parts of the country.

Above all, however, government needs to tackle the poor sanitation problem head-on and not with cosmetic approaches.

Sanitation laws must be enforced devoid of discrimination and government must be committed to the real developmental needs of the country, including but not limited to building and maintaining storm drains to forestall the perennial floods.

While putting the preventive measures in place, various hospitals should equally get prepared to receive any cholera cases should there be an outbreak.

Having recognised that cholera is a global disease burden, the WHO has since 2017, put in place a global strategy to reduce cholera deaths by 90 per cent by close of 2030.

Accordingly, the Global Task Force on Cholera Control (GTFCC) has been established as a partnership of more than 50 institutions, including NGOs, academic institutions, and UN agencies.

The WHO roadmap for achieving the 90 per cent cholera death reduction worldwide has been pivoted on three main strategic focus areas such as:

2. A targeted approach to improve disease prevention: By this, countries and partners are required to prevent cholera transmission in hotspots by organising water, sanitation, and hygiene (WASH) programmes and administering the oral cholera vaccine.

3. Coordination of human, technical and financial resources: Based on this, the GTFCC engenders multi-sectoral collaboration to provide a strong platform for advocacy and communications, fundraising, and technical assistance necessary to fight cholera.

The writer is a health administrator. Email: This email address is being protected from spambots. You need JavaScript enabled to view it.