Year of Roads: Bono benefits from 48 projects, 25 more in pipeline 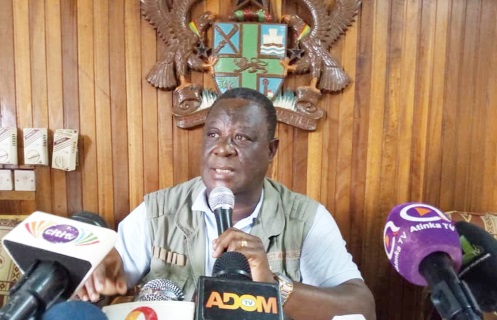 The Bono Region is receiving its fair share of the government's implementation of the "Year of Roads" agenda with the execution of 48 road projects by agencies under the Ministry of Roads and Highways, the sector Minister, Mr Kwasi Amoako-Atta, has disclosed.

In addition, 25 projects, which are at their various stages of procurement, will soon be awarded on contract.

At a press conference to account for the road projects in the region, Mr Amoako-Atta explained that while the 48 ongoing projects had a total of 632.8 kilometres, the 25 planned projects covered 311.1 kilometres.

The projects include the asphalt overlay of selected Berke town roads, Wenchi town roads, Dormaa-Ahenkro town roads, rehabilitation of the New Dormaa-Yawhima road and the upgrading of the Odomase-Adantia-Badu road, among others.

The current construction of storm drains and pavements in Sunyani, as well as other communities in the region, is causing inconveniences to drivers and commuters.

Mr Amoako-Atta, therefore, appealed to people in the region to bear with the contractors since "if you do not suffer, you don't gain."

He observed that Ghana had excellent contractors who were executing projects but there were a few lots whose performance left much to be desired.

"The type of bad roads that were washed away by rain in the past should remain in the past," he stated, adding "our money will not be used to pay such bad contractors."

Mr Amoako-Atta said officials of the ministry had the moral responsibility to deal with bad contractors whose modus operandi was to execute shoddy jobs and work their way through to get paid.

He said the execution of most of the road projects, which were started in the past, got stalled along the way because of lack of dedicated source of funding.

Mr Amoako-Atta said all roads, which were currently under construction, had dedicated sources of funding since the ministry had learnt lessons from past experiences.

Answering a question, the minister indicated that an inventory and designs were being completed on the Sunyani-Techiman Road and gave assurance that the procurement process would start soon.

He also announced that Vice-President Mahamudu Bawumia would cut the sod for the commencement of work on asphalt overlay of 30 kilometres of inner-city roads of Sunyani in the coming weeks under the China Sinohydro facility.

"We are on course with the execution of the 'Year of Roads’ programme and all the 16 regions are receiving their share," he stated.