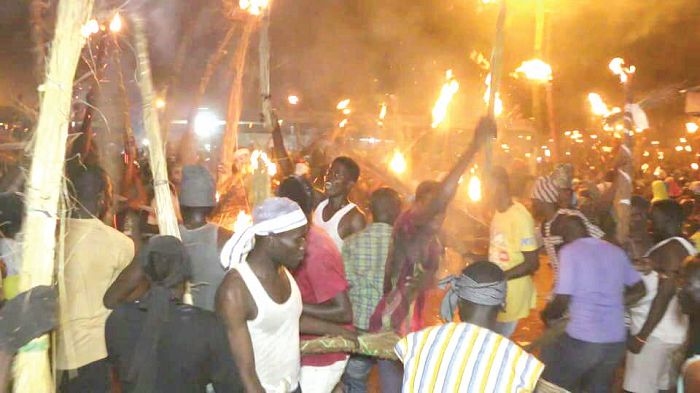 Some of the revellers displaying their straw torches
30.5k Shares

Yendi, the traditional seat of the Dagbon Kingdom, came alive last Monday night when hundreds of revelers joined the Overlord of Dagbon, Ya-Na Abukari Mahama II, and his sub-chiefs to celebrate the annual Fire (Bugum) Festival with pomp and ceremony.

It was the first time in 17 years that a sitting Ya-Na had participated in the time-tested festival in the ancient town of Yendi (Yani).

Since the death of Ya-Na Yakubu Andani II in 2002, the celebration of the Fire Festival had been on hold in Yendi, following the chieftaincy crisis that ensued after the death of the Ya-Na.

The government and the two Royal Gates of Dagbon, in collaboration with other stakeholders, were able to arrive at a concensus, resulting in the selection and enskinment of Ya-Na Abukari Mahama as the new King of Dagbon in January 2019.

The festival took off peacefully at the Gbewaa Palace in Yendi and across the entire Dagbon Traditional Area in the Northern Region, amidst the singing of war songs, drumming and dancing, firing of muskets and the lighting of torches.


The highpoint of the festival was when the Ya-Na emerged from the Gbewaa Palace and lit his torch to signify the commencement of the festival and to demonstrate to the world that peace and unity had been restored to Dagbon.

The celebrations travelled deep into the night.

Among the dignitaries who graced the event was the Northern Regional Minister, Mr Salifu Saeed, who represented the President, Nana Addo Dankwa Akufo-Addo, who refers to himself as Abudani and under whose watch peace was restored in Dagbon.

The Bugum Festival is the first Dagomba festival in the year. It is celebrated on the ninth day in the first month of the lunar year.

The festival is celebrated by descendants of the Mole-Dagbani Kingdom.

According to folklore, a son of a great Dagbon chief went missing and the entire community were asked to search for him. At night, the people had to light straw to continue with their search until they found the prince deeply asleep under a tree and took him to the father.

Mr Saeed, who was excited by the successful celebration of the festival, expressed the hope that Dagbon would regain its lost glory from the long period of instability due to the protracted chieftaincy conflict.

He paid glowing tribute to the Committee of Eminent Chiefs, led by the Asantehene, Otumfuo Osei Tutu II, and all successive governments and other stakeholders.

He also commended President Akufo-Addo, under whose administration the Dagbon chieftaincy dispute was brought to a finality.

"I know for certain that with the peaceful and successful celebration of this year’s Fire Festival, Dagbon has been restored to its past glory.

“With this renewed spirit of unity, oneness and togetherness, we can work to speed up the development of Dagbon,” he added.

Mr Saeed, therefore, called on the investor community to take advantage of the prevailing peace in the area to establish their businesses there.

Some revelers who spoke to the Daily Graphic expressed joy and satisfaction with the event.

Abdul Latif said it was his prayer that the people of Dagbon would continue to live in peace and portray its rich culture to the rest of the world.

"We are, indeed, excited at the peaceful celebration of the Fire Festival in Yendi. We thank God for His mercies and grace," Hajia Safiatu also said.