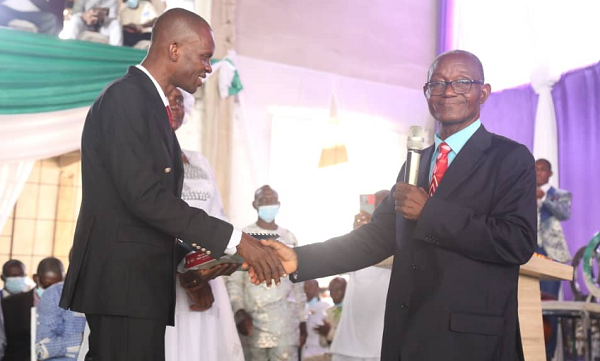 The United Pentecostal Church International (UPCI) has inducted into office its newly elected national executives, including the National Superintendent.

The 13-member national executives whose four-year mandate will end in 2025, is headed by the National Superintendent, Rev. Jerry Hanson-Nortey, and assisted by Rev. Kwakye Anokye Manu.

The newly inducted executives of UPCI with some external officers of the church in a group photo after the induction ceremony.

Rev Hanson-Nortey is the fourth Ghanaian to head the church after it was established in the country by white missionaries in 1968. The church used to be headed by the missionaries.

The colourful event was attended by past national and regional executives of the church, including the Africa Regional Director of the church, Rev. Randy Adams, and former West Africa Area Coordinator, Rev. Nicky Sisco.

In his induction address on Sunday, January 23, 2022, Rev. Hanson-Nortey called for an ‘all-hands-on-deck’ approach to help rebuild the church and expand their territories in the country.

“We are mobilising the whole church to build a 21st Century apostolic church where all pastors, deacons, departmental leaders, and members of UPCI in Ghana will be proud to take new territories,” he noted.

For him, it was about time the church went all out to preach the Gospel of Christ to the lost and ensured that the Great Commission, which is about preaching the Gospel to every soul, was achieved.

Rev. Hanson-Nortey said the theme for his tenure was “Taking New Territories”, explaining that “The agenda for the term is drawn from our church's slogan -

"The whole gospel to the whole world, by the whole church"-a slogan coined out of the Great Commission by our founding fathers.”

He said “My Team and I are determined by the grace of our Lord Jesus Christ, to remain true to our core values, fulfil our mission, and maintain our apostolic identity.”

He further reiterated the commitment of the new leadership to make biblical truth and love for Christ’s work a core focus of their administration in the church.

He said his administration would encourage the planting of churches, training of more pastors as well as aggressively embarking on evangelism to reach out to many lost souls with the Gospel of Christ.

Similarly, he pledged to revive, strengthen and resource the existing churches in the country to enable them to raise the needed funds for evangelism, church planting programmes and projects.

He gave the assurance that the new leadership of the church would ensure that they increased its current regional presence from eight to all the 16 regions in the country, as well as to increase their current 47 zones to 94.

Rev. Hanson-Nortey also pointed out that the church would increase their current number of churches from 163 to 245, pledging that the new leadership would work to ensure the completion of the church’s national office complex.

He further pledged to strengthen the church’s media ministry, noting that plans had been designed to work on the church’s naming and signboard standardisation.

The new Superintendent also hinted of extending the church’s theological school— African Centre for Theological Studies (ACTS-Ghana), in all the 16 regions of the country as part of its efforts to train more pastors with the right teachings and doctrines.

For him, the vision and focus of the church could only be achieved when church members and leaders were equipped with the right skills and knowledge, stressing that the church would equip its leaders with the needed training and skills.

Rev. Hanson-Nortey also paid a glowing tribute to the past leaders of the church for their roles in ensuring the survival of the church in the country.

He mentioned inadequate infrastructure and inaccessible or limited access to traditional media as some of the challenges affecting the church’s growth.

However, he expressed the hope that the newly inducted national executives would work to achieve the vision of the church for the next four years.

He also urged members of the church to support the newly inducted officers with their prayers and substance in order to enable them to deliver on their mandate.

In a sermon, Rev. Adams urged the church to increase their territories so that many would be touched by the message of the Good News.

He said God was ready to fill His house and that He needed people to work with, encouraging the members of the church to avail themselves for God’s work. “There are many villages and towns who have not heard about the Gospel of Christ” and needed to hear about the message of salvation, he said.