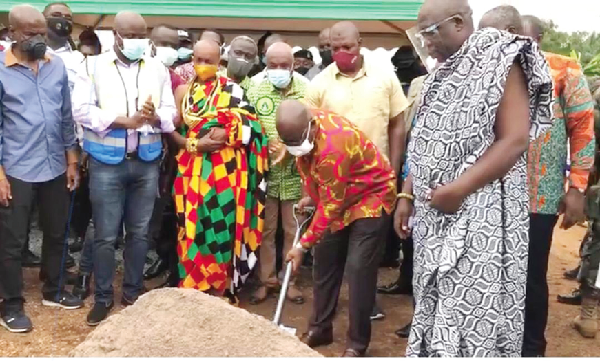 President Nana Akufo-Addo cutting the sod for the construction of the Ho bypass and UHAS internal roads
30.5k Shares

Construction of the Ho-Sokode dual carriage bypass and the upgrading of internal roads on the campus of the University of Health and Allied Sciences (UHAS) in Ho in the Volta Region have started.

This was after the President, Nana Addo Dankwa Akufo-Addo, had cut the sod for the commencement of the projects in Ho last Tuesday as part of activities of his one-day visit to the region.

Under the dual carriageway project, there will be an upgrade of the 5.2-kilometre Sokode Titrinu bypass to a dual carriageway to link Sokode Etoe through the entrance of the UHAS Main Campus and the creation of a roundabout behind the Ho Technical University (HTU) at a location known as ‘Mirage’, which will eventually terminate at the main entrance of the HTU.

The GH¢66.43-million project, which is being undertaken by First Sky Construction, is expected to be completed in 24 months.

The other component of the project is a bypass for vehicles traversing the Ho municipality to Accra, which will also give access to communities in and around the UHAS and the HTU campuses.

The project includes ancillary works such as street lights.

The Vice-Chancellor of UHAS, Prof. John Gyapong, expressed appreciation to the government and said the completion of the project would help the institution remain focused on community service and care.

He said UHAS was a COVID-19 testing centre that was providing services for people in the Eastern corridor, such as the Volta and the Oti regions, including some parts of the Eastern Region.

However, he said, health facilities had difficulty transporting samples to the university due to the bad nature of roads.

He, therefore, thanked President Akufo-Addo for his quick response to the needs of the university.

"Mr President, when the success story of UHAS is written, the resolution of our commuting nightmare will feature prominently as your responsiveness to the needs of this university," Prof. Gyapong said.

Earlier at a press conference, the Minister of Roads and Highways, Mr Kwesi Amoako-Atta, said the region had 38 road projects going on simultaneously, adding that "it is among the regions that are doing well in terms of road construction”.

Currently, he said, seven contractors were on the Eastern Corridor Road working earnestly to complete the various stretches awarded to them.

He said 13 new projects would soon be added to the ongoing ones.

On bridges in the region, the minister said the President was particular about the Volivo Bridge, hence the decision to construct the bridge on the River Volta, for which funding had been secured from Japan.

"We have gone through rigid processes and the companies selected are of standard and we hope that they will be able to perform,” he said, adding that “the Eastern Corridor Road is important and so all contractors working on that portion are being monitored."