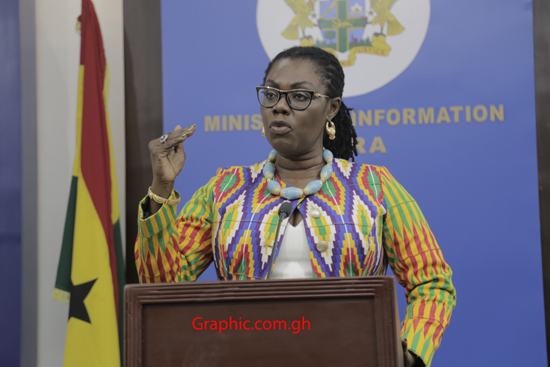 The Ministry of Communications has welcomed the Accra High Court's dismissal of the application by the telecommunications giant, MTN, to stop the National Communications Authority (NCA) from taking corrective measures against the company as a significant market player (SMP).

The Minister of Communications, Mrs Ursula Owusu Ekuful, in an interaction with the media after the launch of the upgraded COVID-19 symptom tracker app yesterday, said it was unhealthy for any country to have a single dominant telecommunications operator that had about 70 per cent share of revenue and 60 per cent share of the total market.

"We need to do something about the uneven, lopsided market that we have; it is not healthy. I expect the NCA to continue the work that it started in 2016 and complete it, so that we have a healthy competitive climate for the industry to thrive, not just for one player but for all players in the telecoms sector to succeed.

“I want the regulator to sit with all players in the industry and develop sustainable mechanisms to address the current imbalance and ensure that this does not happen again," the minister said.

Responding to the allegation that perhaps she had an axe to grind with MTN, Mrs Owusu Ekuful said she had no negative intent against the mobile phone company.

"Nobody is seeking to punish MTN for its success, but some of its practices are not helping the development of the industry. We have nothing personal against it. We have specific legislation to deal with specific instances and that is exactly what the regulator is doing,” she said.

“I urge MTN to disabuse its mind of every notion that I am out to get it. I am fully in support of every one of them. The government will do whatever it can to promote the significant investments the telcos have made in this country," she added.

The minister stressed the need for greater collaboration between her ministry and all telecom companies, saying: "We are determined to work closely with the telecommunications industry to facilitate the digital inclusion of our country.”

Pursuant to Section 20 (10) of the Electronic Communications Act, 2008 (Act 775), on June 9, this year, the NCA classified MTN as a SMP, after the regulator had determined that the mobile network operator controlled more than 57 per cent share of the voice market, as well as more than 67 per cent of the data market.

The classification means that the NCA has concluded that MTN controls more than 40 per cent of the telecommunications industry.

As mandated by law, the NCA can take remedial measures against MTN to curtail its market dominance in order to promote competition in the industry and also protect the interest of consumers.

Act 775 allows the “corrective measures” against an SMP in order to promote competition, protect other mobile network operators and consumers.

As part of the corrective measures, the NCA, among other things, decided to “review and approve all charges by MTN”, set caps on what MTN can charge for its services, ensure that MTN’s access to information did not disadvantage other operators and also impose a 30 per cent interconnect rate for two years in favour of other “disadvantaged operators”.

The Commercial Division of the Accra High Court, in a ruling last Tuesday, held that the NCA did not breach any law throughout the processes that had led to MTN being classified as an SMP.

The ruling by the court gives the green light to the NCA to take corrective measures against MTN in order to promote competition and protect other mobile network operators and consumers.

Apart from dismissing the case, the court, presided over by Justice Samuel Asiedu, a Justice of the Court of Appeal with additional responsibility as a High Court judge, also awarded costs of GH¢10,000 against MTN.