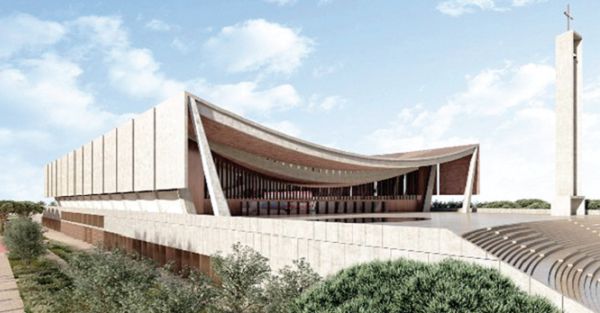 An artist’s impression of the proposed national cathedral
30.5k Shares

The Supreme Court has directed the parties involved in a suit challenging the construction of a National Cathedral to file their legal arguments simultaneously within a week.

The court gave the direction last Tuesday after it had adopted the joint memorandum of issues filed by the legal team of the plaintiff, Mr James Kwabena Bomfeh, and the Attorney-General (A-G).

The memorandum is what would be adjudicated upon by the court.

Meanwhile, the court has granted a request by Mr Bomfeh’s lawyers to amend their writ.

Counsel for Mr Bomfeh, Dr Aziz Bamba, informed the court about an application that he had filed seeking permission from the court to make changes to the writ.

A Deputy A-G, Mr Godfred Yeboah Dame, did not oppose the application for amendment.

President Nana Akufo-Addo cut the sod for the construction of the National Cathedral on March 6, 2017, as part of events that marked Ghana’s 60th independence anniversary.

Funding for the 5,000-seater edifice is to be sourced from individuals within the Christian community.

Plans by the government to demolish houses, including those housing judges, on the land around Ridge in Accra to make way for the construction of the cathedral generated a debate, with the public divided over the project.

In March last year, Mr Bomfeh, the acting General Secretary of the Convention People’s Party  (CPP), invoked the original jurisdiction of the Supreme Court, arguing that Ghana was a secular state and, therefore, it was wrong for the state to be “excessively entangled in any religion or religious practice”.

He, therefore, wants the apex court to declare the building of the National Cathedral and state involvement in the Muslim pilgrimage to Mecca unconstitutional.

He is seeking “a declaration that the decision of the Government of Ghana to purposely endorse, assist, aid, partly sponsor, and/or support the construction of a national cathedral near the State House of Ghana, for Christian interdenominational church services amounts to an excessive entanglement of the Republic of Ghana in religion and therefore unconstitutional’’.

In September 2018, Mr Bomfeh filed an application for interlocutory injunction seeking to restrain any activity towards the construction of the cathedral, including the demolition of residences of judges.