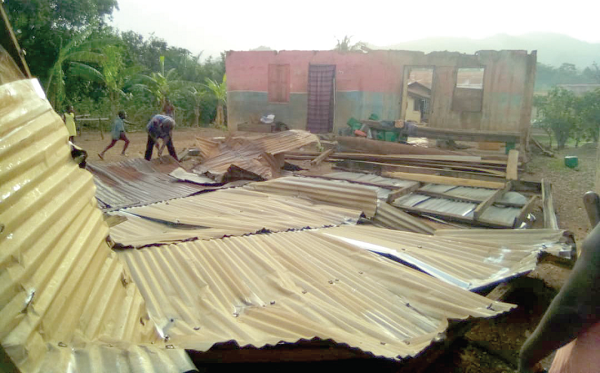 Twenty-seven residents of Pankese in the Birim North District of the Eastern Region were rendered homeless, when the roofs of their homes were destroyed by strong winds during a rainstorm.

According to victims, the storm, characterised by mighty winds in the evening of March 20, took off the roofs of five homes, leading to the displacement of the victims who had to temporarily stay with friends, while others slept in the open.

The Akyem Kotoku Mponua Gyasehene, Nana Kwesi Addo II, has since the storm gone to the aid of the victims with some building materials and a cash of GH¢1,500 as workmanship for a carpenter to reroof the buildings.

In an interview with the Daily Graphic, Nana Addo said, “I sympathise with the victims who for some days had no roofs over their heads. As a chief, it behooves on me to always put the wellbeing of my people at heart; as a result, hearing about the sad incident moved me and I had to act quickly.

The Unit Committee Chairman of Pankese, Eric Boafo, expressed gratitude to Nana Gyasehene for his timely donation to the victims.

"We want to thank Nana Gyasehene for his kind response to the cry of the victims. It is one of the several beautiful things he has done for this community and we cannot thank him enough. On behalf of the victims, I say may God bless him more abundantly and strengthen him for his great deeds and love for residents of Pankese," he said.

He nonetheless, lamented the lack of immediate actions on the part of the National Disaster Management Organisation (NADMO), since they visited days after the incident and appealed that they also contribute their quota to the welfare of the people.

In an interview with the Daily Graphic, the NADMO Director of the Birim North District, Grace Ivy Dokuah, confirmed that they had visited the victims and their homes but had been unable to help them due to the shortage of relief items.

"We visited the victims and their homes after hearing about the incident but we have not been able to give out any relief items because at the moment all items are finished. We have written to the Eastern Regional Office of NADMO for some relief items; once it comes we will quickly move in and do the needful," she said.

An observation made by the Daily Graphic was that all affected homes; some built with mud and outmoded were completely left without roofs and had been deserted.

A victim, Vida Brokwa, said she had since the event been living with her friend and her children. However, she later got a loan from someone to temporarily get shelter while they awaited NADMO and benevolent people to come to their aid.

Another victim, Kwabena Agyekum, narrated that he had since the incident been sleeping in front of kiosks every evening, as it was the only available place of comfort, especially during downpours.