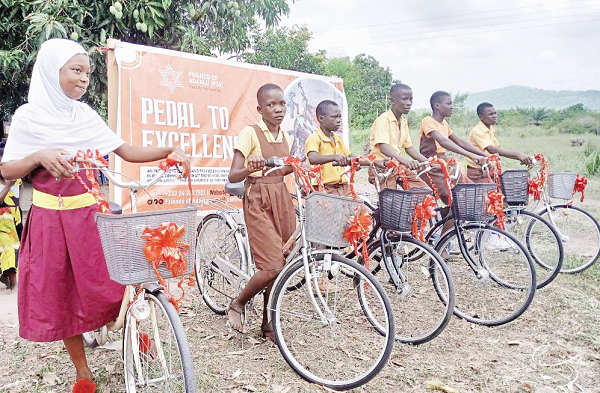 A bicycle initiative to alleviate the suffering of schoolchildren in the Adaklu District in the Volta Region has commenced.

The initiative dubbed, "Pedal to Excellence" involves the provision of bicycles to needy schoolchildren in the area as a contribution to promoting quality education for transformational change among indigenes.

Started by the Founder and Executive Director of Friends of Adaklu (FOA), Helga Liz Haberfellner, the initiative was launched on April 5 and saw six children of the Dawanu Salvation Army Basic School at Adaklu as the first recipients of the bicycles.

The donation, which was made by Gillian Sylvester and Steven Sylvester, members of FOA, is to aid the schoolchildren in their commute from Golokofe, Dome, Agblefe, Kpedzi and other communities to the school.

The Country Representative of FOA, Stella Kudah, said the initiative was also to "create and provide easy means for children to go to school on time, less tired and above all, promote healthy living through exercise as the children pedal to school".

She said in the Adaklu District alone, over 1,015 out of 8,000 schoolchildren walked not less than one to three hours to school daily, leading to fatigue and lateness and hence reducing their time in learning.

This situation had impacted their academic and overall well-being as well as made them susceptible to physical and sexual threats associated with such long commutes, she stated.

Ms Kudah, therefore, appealed to individuals and organisations to come on board and support the bicycle programme to enable our schoolchildren to achieve their dreams in life through education. This, we believe, will bring a stop to all manner of physical sexual threats," she said.

The Headmistress of the Dawanu Salvation Army Basic School, Georgina Titiati, said the initiative was ingenious and appealed for it to be expanded to rope in more beneficiaries.

She said most of her students were being impacted by dwindling livelihood activities in the low income area, where they were starved of food due to poverty and were, therefore, unable to concentrate in school.

She appealed for a new classroom block for the school's junior high school students who currently were unable to withstand the heat from the congested room of the headmaster's bungalow being used as a makeshift classroom.