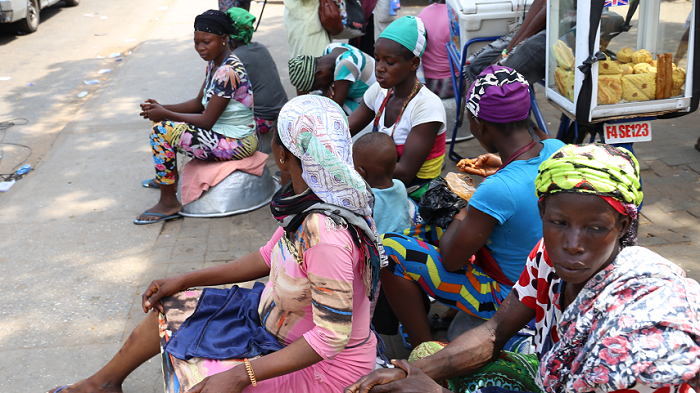 Others who had probably not heard the news also joined in the jubilation while they tried to find out the reason for the jubilation.

In an interview with the Daily Graphic, the Finance Secretary of the Abossey Okai Spare Parts Dealers Association, Nana Kwabena Peprah, welcomed the abolition of the tax and described the news as great relief to traders in the spare parts industry.

He said the abolition of the taxes would provide an opportunity for spare parts importers to channel their resources into expanding their trade.

Describing the budget as “the budget of hope”, another trader, Mr Ohene Danso Siaw Erick Ofosu Jnr, said: “We doff our hats for the President and his team. They have really shown that the promises were not just for the campaign but they really care about the citizens.”

Some head porters, popularly known as Kayayei, described the scrapping of the GH¢2 levy paid by Kayayei as good news, since the levy was unnecessary and did not bring any benefits to the Kayayei, report Theresah Esson & Ohenewaa Osei-Appiah.

One of the head porters and mother of two, Ms Fawzia Ahmed, said it would be a relief to them if it was implemented.

There were others who felt that revenue officials of the assemblies would still harass them for the levies.

Another head porter, who identified herself only as Samatu, said paying the levy was not a problem but the fact that the head porters never benefited in any way from the levies collected.

Charles Andoh reports that at the Makola Market in Accra, Mrs Rosemary Odame stated that the depreciation of the cedi was a major issue that needed to be dealt with.

Some of the traders also called on the government to put pragmatic steps in place to deal with the duties collected at the various borders from traders.

Maclean Kwofi reports that operators of domestic airlines will soon begin working out the modalities for reducing domestic air fares to increase passenger volumes within the country.

That followed the abolition of the 17.5 per cent Value Added Tax (VAT) on domestic airline tickets by the government.

“Definitely if the 17.5 per cent VAT has been removed from domestic airline tickets, the price will come down, but how much I cannot tell now. We need to work on other components to ensure that this is done. So we have to see the budget in order to ascertain when and how the removal will take effect,” the Chief Operating Officer of Africa World Airline (AWA), Mr Samuel Thomson, told the Daily Graphic in Accra.

While the General Secretary of the Industrial and Commercial Workers Union (ICU), Mr Solomon Kotei, was upbeat about the economic prospects of the 2017 budget, the Secretary General of the Ghana Federation of Labour (GFL), Mr Abraham Koomson, was cynical and disappointed, reports Caroline Boateng.

Both were, however, in agreement over the fact that the implementation of the economic policy of the government for the year would have to begin for partners to monitor commitments to its decisions in the document.

“For me, I will not call it ‘asempa’ (good news) budget; I will call it ‘ahoto’ (peace of mind) budget,” Mr Kotei, who was in Parliament to listen to the budget, said.

The highlight for him was the decision to abolish duty on imported spare parts.

On the progressive reduction of corporate tax from 25 per cent to 20 per cent, starting from 2018, he said it would mean more liquidity for employers to invest in their businesses, expand and even commit to better salaries and bonuses for employees.

Mr Koomson said the budget held no fundamental policy strategy to ensure the sustenance of the manufacturing sector.

“For us, it was very important to see in the budget how the government could regulate the manufacturing sector for industries to thrive,” he said.

Zadok K. Gyesi reports from Tamale that a petty trader, Madam Fadilatu Sagato, said she was happy that the government was going to remove kayayei taxes.

According to her, it was unreasonable that the government was taking taxes from the kayayei.

For Mrs Abigail Takyi Owusu, a student nurse at the University for Development Studies (UDS), some of the tax exemptions would help businesses to grow.

The Executive Director of Rural Initiatives for Self Employment (RISE), Ghana, Mr Awal Ahmed, said while the budget was generally positive, he had expected to hear more programmes on youth and sports and persons with disability in it, reports Alhandu Abdul-Hamid.

A banker with the Bolgatanga branch of the Bank of Africa, Mr Mohammed Mubarak, hailed the scrapping of taxes on financial services.

A retired educationist, Mr Robert Ajene, said even though the implementation of the free senior high school policy would face challenges, it was possible to implement and called on the people to be prepared to make sacrifices.