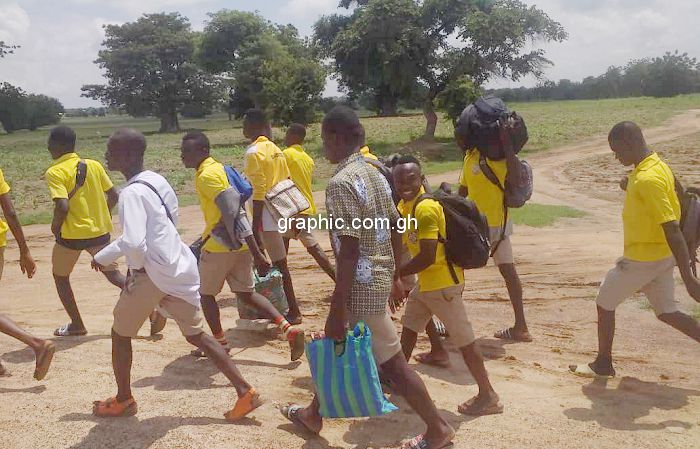 Flashback: Some students of the Sandema SHTS on their way home after the school was closed down
30.5k Shares

An autopsy conducted at the Tamale Teaching Hospital on Master Nashiru Jibril, the 17-year-old student who was reportedly shot dead during a student unrest at the Sandema Senior High Technical School in the Builsa North District of the Upper East Region in July this year, shows that the boy died through gunshot wounds on his chest.

Master Jibril died on July 16, 2019, after sustaining gunshot wounds when police were called in by the school authorities to quell the violence that erupted in the school between the cadet corps and some of the students when the cadet tried to enforce some rules and regulations of the school.

But the police had earlier indicated that they fired “rubber bullets and tear gas" to control the disturbances on the school premises.

The spokesperson for the family of the deceased, Mr Mamudu Adams, made this known at a news conference at Paga last Friday.

Mr Adams said “what is even worrying to the entire family is that since this unfortunate incident apparently due to the negligence of the police who are supposed to protect the lives of citizens, the family has been waiting for the police to pay them a visit, but for almost two months now that has not happened".


The spokesperson pointed out that “the police could have fired warning shots or rubber bullets" instead of live bullets because the students were not armed robbers.

Mr Adams, therefore, called for an immediate comprehensive report to explain the circumstances that led to the death of Nashiru, and to make known the identity of the police officer who “unprofessionally fired and killed the boy through a direct bullet to his chest as revealed by the autopsy report at the Tamale Teaching Hospital”.

The family of the deceased also demanded the immediate interdiction of both the police officer, who fired the shot that killed the boy and the Sandema District Police Commander, who deployed the police officer to the school compound.

The family equally called on human rights activists to prevail on the Ghana Police Service and the judiciary to arrest and prosecute the police officers who misconducted themselves in their line of duty since “no one is above the law".