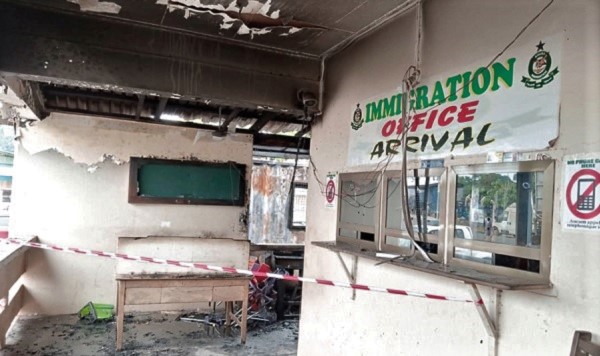 The office building destroyed by the fire
30.5k Shares

The Ghana Immigration Service (GIS) has said it is awaiting a report from the Ghana National Fire Service (GNFS) before it undertakes repair works on its office at the Elubo Border in the Western Region that was destroyed by fire.

The GIS said even though two assessments had been made on the destroyed office building, the process of rehabilitation required that a fire report was attached to the request for renovation.

Reacting to concerns about staff who have been left hanging at their duty post at Elubo because of the fire, the Head of Public Affairs of the GIS, Supt Michael Amoako-Atta, debunked rumours making the rounds that the service had abandoned the planned renovation works.

The Elubo office of the GIS is located at Ghana’s southern border with Cote d’Ivoire and serves as an entry point for nationals from other West African countries such as Liberia, Sierra Leone and Guinea. The burnt office was a nerve centre of GIS operations.

The office processed passage for an average of 1,000 people every week, as such the lack of a functional office is a big blow to securing the country’s western border, especially as the country is seeking to prevent importation of the coronavirus disease (COVID-19).

The container-converted-office was razed in a blaze on March 22, this year, displacing about 188 Immigration officials who worked in the structure.

The fire destroyed the steel edifice which served as offices for the second in command of the service, the staff officer, administrative staff and data centre which was critical to operations at the border.

Almost all the office equipment, including steel and wooden cabinets, computers and accessories; air conditioners and office furniture, administrative and personal files as well as the office’s digitised systems were damaged.

When the Daily Graphic visited the border post located in the Jomoro District in the Western Region last Tuesday, it observed that not much had been done to the burnt office.

Also, with borders closed there was not much activity except some officers who were on security duties.

A source who complained about the situation was worried that if nothing was done quickly, criminals and those on security wanted lists could easily sneak into the country as there were no records on them to assist in investigations.

That aside, it said, there would be chaos at the border regarding checking of arrivals and departures since immigration officers at the Elubo Border currently had no place to work.

“All 188 officers and men will now work in shifts to do patrols, register vehicles and control arrivals and departures and so on,” it said.

While admitting that it had taken time to get the affected office renovated, Mr Amoako-Atta said the process could not be circumvented.

“Every assessment that is necessary has been done and all is set for the renovation work to start. Unfortunately, since due process must be followed, the service has had to wait for a fire report from the Ghana National Fire Service.

“Once the report which we have requested is received, work will start,” he said.

The GIS Head of Public Affairs said given the important function of the Elubo Border post in national affairs, the exercise to have the office renovated would be done with dispatch.

He said even though the border was closed, officers were still at post working and patrolling the unapproved routes into the country.

“Even when the borders are reopened and the work on the office rehabilitation is not completed, there is a contingency plan to facilitate operations until the works are completed,” Mr Amoako-Atta assured.