Reduce number of canoes in Ghana to 9,000 - Fisheries expert to govt 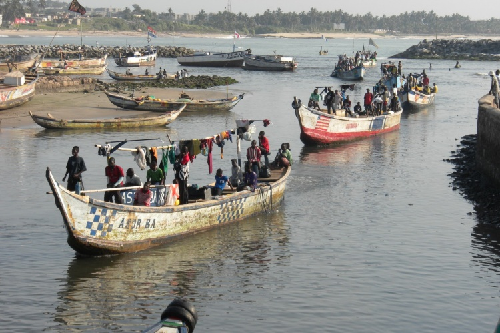 A Natural Resource Economist and Director of the Environment and Natural Resource Research Initiative (ENRRI – EfD Ghana), Professor Wisdom Akpalu has suggested that Ghana should reduce the number of canoes in the country from the current figure of about 13,000 to 9,000.

That, he explains, will help guarantee the sustainability as well as the profitability of the country’s fisheries sector.

According to him, the large number of canoes and trawlers in the country account for overcapacity, hence reducing the catch per unit area and also encouraging illegal fishing practices such as the use of light, dynamite, carbide, and small mesh size nets.

Prof. Akpalu, who is also the Dean of the School of Research and Graduate Studies of the Ghana Institute of Management and Public Administration (GIMPA), made the remarks in a seminar presentation dubbed: “Capture Fisheries Management in Ghana: Challenges and Prospects” in Accra on Tuesday, August 18, 2020.

The seminar, which was organised by the Environment and Natural Resource Research Initiative of the Environment for Development (ENRRI – EfD Ghana), brought together key players in the Ghanaian fishing industry.

ENRRI is hosted by the Institute of Statistical, Social and Economic Research (ISSER) at the University of Ghana (UG), and the School of Research and Graduate Studies (SRGS) at GIMPA, and brings together accomplished researchers with varied expertise in environmental economics from Ghana and elsewhere to conduct evidence-based research, and advise government and development partners on policy options for managing the environment and scarce natural resources.

ENRRI contributes to the sustainable management of Ghana’s natural resources through capacity development, policy-relevant research and policy engagement. The EfD initiative is funded by the Swedish International Development Initiative (Sida).

Prof. Akpalu, who is also President of the African Association of Environmental and Resource Economists (AFAERE), explained that although 38,940 fishermen will be affected when canoes are reduced, government can raise enough revenue from the remaining canoes to engage the affected fishermen in other productive ventures.

He noted that having many canoes on the country’s waters has never been beneficial to both the government and the fishers.

According to him, government spends a lot of money subsidising premix fuel and that when government reduces the number, it would cut down government’s expenditure.

He also called for a reduction in the number of trawlers in the country, arguing that when the trawlers are reduced, it will increase the catch per unit area for artisanal fishers, who contribute about 70 per cent of all landings in the country.

Prof. Akpalu said because of the critical nature of the fisheries sector, there was the need for government to take immediate action to protect the industry from collapse and also ensure its sustainability and profitability.

He explained that profit that could be derived from the artisanal fishing when the canoes are reduced, could be US$271 million annually as against the current figure of US$169 million annually.