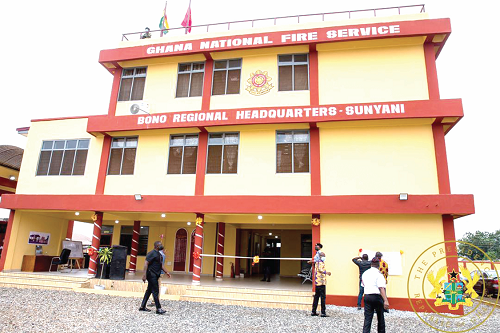 President Akufo-Addo, after unveiling a plaque to inaugurate the Bono Region Headquarters of the Ghana National Fire Service

The President also inaugurated a 42-bed fully furnished maternity block at the Sunyani Municipal Hospital to help reduce maternal and newborn mortality and morbidity in the municipality.

The completion of the first phase of the fire station project, which began 22 years ago, will bring relief to personnel who hitherto had to share office accommodation with other departments.

The first phase of the project comprising a two-storey office block, a spacious parade ground, a fire engine bay and a wall which started in 1999 was scheduled for completion in 2001 at the cost of GH¢449,420.

However, delay in the implementation of the project due to financial challenges pushed its completion schedule to June 2021 and increased the cost to GH¢2.67 million.

The Sunyani Zonal Consultant of the Architectural Engineering Services Limited (AESL), consultants for the project, Mr Edward Agyeman Prempeh, told newsmen that the second phase would comprise transit quarters and a maintenance block.

Other facilities to be included in the second phase of the project are a multi-purpose sports court, a canteen and a tower block, among other facilities.

It was all joy when smartly dressed personnel of the GNFS mounted a parade in honour of Nana Akufo-Addo.

Accompanying the President were the Minister of Health, Mr Kwaku Agyemang-Manu; the Minister of Employment and Labour Relations, Mr Ignatius Baffuor-Awuah; the Bono Regional Minister,  Ms Justina Owusu-Banahene, and some Members of Parliament from the area.

The wards are equipped with all the necessary or required items, tools and equipment needed for the smooth operation of the facility.

The facility, which was constructed by the Sunyani Municipal Assembly, has been equipped with beds, delivery beds, operating tables and lumps, among others, by the Sunyani Central District Rotary Club.

President Akufo-Addo also inspected other ongoing projects in the Sunyani Municipality and the Sunyani West District.

They include an assembly hall, office complex and troops accommodation at the Liberation Barracks, Sunyani and rehabilitation works on the Sunyani Town roads being financed through the Sinohydro credit facility.

He also inspected the construction of an office accommodation complex for the Sunyani West District Assembly and attended the one-week funeral celebration of a founder member of the New Patriotic Party, the late Mr G.K. Awuah in Sunyani.

The President rounded off his two-day visit to the Bono Region with an inspection of the rehabilitation of the Chiraa-Akwaasua Road and a courtesy call on the Chief of Chiraa, Barima Minta Afari.