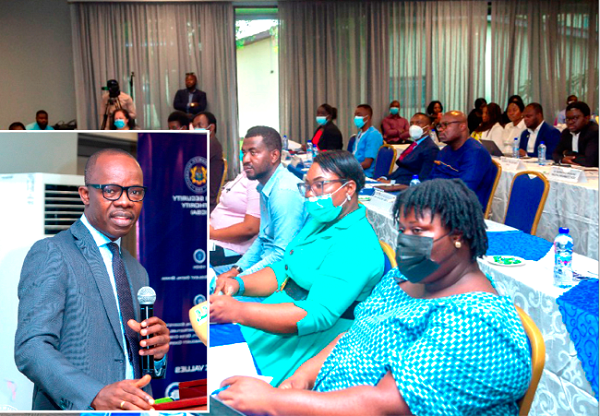 More than a third of Ghanaian young people between 12-17 years have access to the internet, mostly using mobile phones.

However, the greater use of the internet increasingly exposes children and young people to the dangers of all forms of abuse.

A recent UNICEF Ghana report showed that many children had indicated that they have been treated in a hurtful way by someone else when using the internet.
Boys, older children and those living in urban areas report upsetting incidents more often.

Sexual content, hurtful comments, fraud or violence are among the things that children find upsetting. In many of these cases, parents are not even aware of the incidents.

To overcome the bottlenecks and provide child-friendly internet, the government is designing a novel policy meant to create a safer and efficient environment on the internet for children and young people in the country.

The National Child Online Protection (COP) Framework will provide the administrative, regulatory, institutional and legal support to protect children when using the internet.

The new COP framework takes inspiration from the WeProtect Global Alliance Model National Response and expanded its scope to cover all forms of Online Child Sexual Exploitation and Abuse (OCSEA).

The framework has also been revised to integrate the new Cybersecurity Act, 2020 (Act 1038) which regulates cybersecurity activities.

Currently at the validation stage, inputs, comments and suggestions from stakeholders will be included in the COP framework for onward submission to Cabinet for approval.

It is being championed by the Cyber Security Authority (CSA) with support from UNESCO, Child Right International and other agencies.

At the Civil Society Organisations (CSOs) forum for the validation of the Child Online Protection Framework in Accra on July 5, the acting Director-General at the CSA, Dr Albert Antwi-Boasiako, called on CSOs to be accountable for getting the message of child online protection and other regulations to the public.

He said the role of CSOs to the development of the Child Online Protection Framework could not be overemphasised, and the job of ensuring the safety of children was a civil society mandate.

"You must own this process; you are on the ground. As you hold the government accountable as an enabler of cybersecurity, you must in return be held accountable for your responsibility to spread the word to the people,” he said.

He stated that the government had put the structures in place through the passage of the Cybersecurity Act, 2020 and other initiatives, which led to an International Telecommunications Union (ITU) ranking of 86.96 per cent in 2020 from an earlier ranking of 32 per cent in 2017.

This, he said, was in respect to cybersecurity readiness; it was now time for operationalisation and implementation, which required active collaboration by all stakeholders.

The acting Director of the Department of Children at the Ministry of Gender, Children and Social Protection (MOGCSP), Florence Ayisi Quartey, said a study conducted by the ministry showed that nine in 10 children had been on the internet before, either for information or recreation.

She urged CSOs to share data and information on child cybercrime issues with the government through the CSA to be captured in the national data for decision-making.

Mrs Quartey, therefore, called on them to work with the CSA to finalise the national COP framework and ensure its implementation.

The Head of Child Online Protection at the CSA, Afua Brown-Eyeson, said the objective of the validation was to strengthen the foundation of the framework, create awareness among policymakers, industry players, parents and educators, as well as children and young people.

“It is also to develop practical tools and procedures to help minimise the risk children face online,” he said.

She urged the participants on the child online provisions in the Act 1038, which criminalised various child online abuses.

A representative of UNICEF, Emmanuel Nyarko Tetteh, said the risk of online child abuse was on the rise, and they were happy with the validation forum to enable the relevant inputs to enrich the document for implementation.

“UNICEF is happy with the provisions of the Cybersecurity Act, 2020 and Ghana’s efforts in child online protection and will continue to give more support to the government in that regard,” he said.