Over 5,000 women benefit from garden initiative

More than 5,400 women and persons with disability (PWDs) in the Northern and North East regions have benefited from a backyard farming initiative.

A non-governmental agricultural capacity-building and innovation organisation, Agrihouse Foundation, which is pushing the initiative across the country, assisted the beneficiaries to set up home vegetable gardens, providing them with training, as well as seedlings of 12 assorted vegetables.

Agrihouse Foundation provided fertilisers, gardening tools, as well as some level of extension and supervision services to interested households.

The initiative is being funded by the United States Agency for International Development (USAID) through the Alliance for a Green Revolution in Africa (AGRA), an organisation that seeks to transform African agriculture from a subsistence model to strong businesses.


Providing an update on the initiative in a progress briefing in Accra yesterday, the Founder and Executive Director of the foundation, Alberta Nana Akyaa Akosa, said the initiative, which was launched two years ago during the height of the COVID-19 pandemic, had provided households with a simple and easily accessible source of augmenting their daily food needs as a sustainable lifestyle, especially in the face of the ever-rising cost of food.

She added that the project was helping women and PWDs to improve upon their nutritional values while simultaneously contributing to ensuring food security in the country.

“Our target is to ensure that the home is stable with food containing the right kind of nutrients so we even introduced foods that are not common to women in that part of the country,” Ms Akosa said. 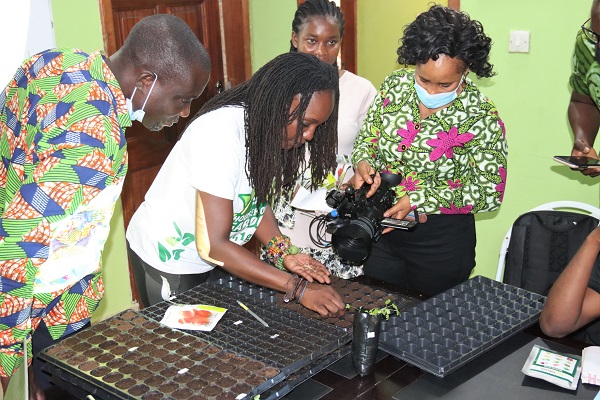 She also intimated that the organisation was looking forward to expanding the project to other parts of the country.

Ms Akosa, therefore, called on the government to take a critical look at the initiative as one of the means to curb the ever-rising cost of food, particularly in urban centres such as Accra.

She also called on both sectors to support the initiative, adding that it was a national agenda that everyone had a collective role to play.

Launched in May 2020, One-Household, One-Garden project was primarily aimed at augmenting the government’s efforts in providing food for households who were adversely affected by the COVID-19 restrictions.

The interventional initiative, which originally targeted 2,000 people, was also to empower women and create employment for the youth engaged in agriculture.