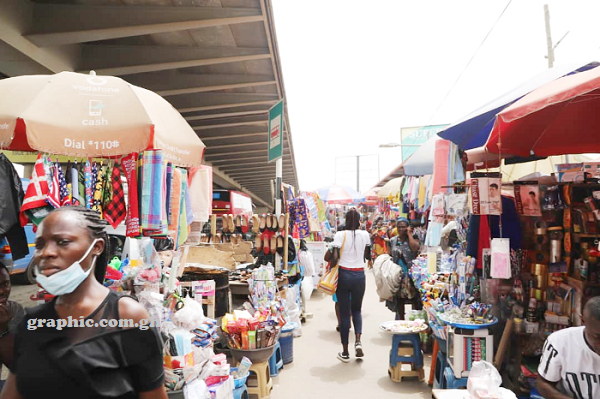 A full market session on a pavement under a part of the Kwame Nkrumah Circle Interchange
30.5k Shares

There is an overspill of traders onto pavements within the Kwame Nkrumah Circle Interchange enclave as the Odawna Market remains closed, almost five months after fire ravaged the market.

The market has currently been locked, awaiting reconstruction following the Tuesday, November 17, 2020, fire incident which consumed hundreds of stores and reportedly affected more than 3,000 traders.

Wide areas of pavements within the interchange area had been reduced into single-lane footpaths by the activities of the traders, as observed by the Daily Graphic last Thursday.

In areas such as the frontage of the Odawna Market, the traders had completely covered the pavements to court buyers, compelling pedestrians to compete with vehicles on the streets.

It was gathered that a large number of the traders, including those who had stores in the Odawna Market, were already selling on the pavements before the fire outbreak.

The situation had, however, been compounded by the closure of the market, the traders said.

It was also gathered that the traders paid a daily fee of GH₵1 to the Klottey Korle Municipal Assembly.

Amidst the chaos, there was also an arbitrary disposal of waste onto the pathways and sections of the streets.

Some traders affected by the fire said they had a tough time securing spaces on the pavements to sell their products because others had already occupied the spaces.

The intense competition for space has compelled some traders to operate an all day business for fear of losing their spots to others.

"I was lucky to find a little space two weeks after the outbreak. However, the competition here is very intense so in order not to lose my spot, I run a shift system with my daughter day and night," a trader, Mary Adolley, said.

Another trader, Francis Allotey, said he had been compelled to hawk his wares because he could not secure a space, and only got the opportunity on the pavement when any of his colleagues failed to show up.