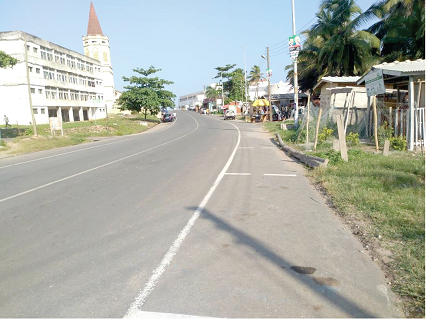 A deserted street in Cape Coast before the announcement of the results of the Presidential election
30.5k Shares

The National Democratic Congress (NDC) in the Volta Region has commended the people of the region for the huge turnout and voting massively for the party, Mary Anane-Amponsah reports from Ho.

The party says it is satisfied with the regional performance of the party in the parliamentary and presidential elections in the face of what they call intimidation and mass deployment of heavy security to the region.

The party said it declared the voting day as communal labour; and that saw the people turning out in their numbers to exercise their franchise in fulfilment of their constitutional rights.

The party's Regional Secretary, Mr James Gunu, said these during a press briefing on the outcome of the general election in the region on December 7, 2020.

The NDC won 17 out of the 18 seats in the Volta Region, with the Hohoe Constituency falling to the NPP. This Mr Gunu attributed to a number of reasons such as the constitutional manipulation to carve Santrokofi, Apkafu, Lipke and Lolobi and (SALL) out of Hohoe, where the NDC gets the chunk of its votes, as well as vote buying and huge bussing of people.

He noted that in spite of all the activities of the NPP in the region, the NDC recorded 33,542 in the presidential elections in Hohoe as against 14,389 for the NPP.

He said the massive votes of 606,508 given to the NDC by the people of the Volta Region was a sign of confidence the people had in the NDC.

Mr Gunu posited that the people have appreciated the good works of the NDC when they were in power, such as the building of the Ho abattoir, construction of several roads in the region, building of the Ho Market, the Ho Airport, and the establishment of the University of Health and Allied Sciences (UHAS), among others.

The Volta Regional Chairman of the NDC, Mr Henry Ametefee, said the massive votes showed clearly that the people had rejected the Akufo-Addo-led government.

From Cape Coast, Shirley Asiedu-Addo and Edith Mensah report that residents have expressed satisfaction at the peaceful and mature manner in which people voted.

They said it would have been a dent on Ghana's international reputation if the elections had gone bad, describing the exercise as well conducted, peaceful and stress free.

Meanwhile, a stroll in town showed a calm and quiet Cape Coast metropolis as people went about their daily routine.

A resident, Mr Joe Mason, said although he was an NDC member he was ready to accept the outcome of the election. "It can go either way. No problem. There is no need for fighting,” he said.

A shop owner, Mr Prince Oduro Yeboah, said he was happy with the smooth process. "I'm happy with the process and how the polls were handled. I am happy with the outcome of the election. I think we've all done well, for security, I'll say 90-95 per cent.”

“I will urge all those who are out there making noise in town to wait for the Electoral Commission. Whatever it is, we should all relax and wait for the EC," he stated.

A trader, Ms Yvonne Essuman, said the election was relatively peaceful compared to previous ones but expressed worry about building tensions due to undeclared results.

“ We are satisfied with how the security personnel acted during this election,” she said.

A student, Mr Ebenezer Hanson, said he was happy the elections were peaceful nationwide although there were few cases of violence.

“I'm excited with the outcome although the MP I voted for didn't win," he stated.

“Our security forces have been up to the task; they've been really doing well since the elections started. We thank God for everything,” he said.

A fruit seller, Ms Naomi Nyameyie, said she felt proud to be a Ghanaian considering the fact that all went well. "I feel proud we have all done the right thing.”

“This is my fifth time voting; I think this is the most peaceful. When I got to the polling station, there were police officers but they didn't scare us and we voted peacefully so I'm okay with this election,” she told the Daily Graphic.

A businessman, Mr William Anakwah, called on the EC to declare the results to reduce the tension.

From Kumasi, Kwadwo Baffoe Donkor reports that the New Patriotic Party (NPP) says it is impressed with the nominal figures it garnered in the Ashanti Region even though its performance reduced in terms of percentage.

The Regional Secretary of the NPP, Mr Sam Pyne, told the Daily Graphic that to get “almost 1.8 million votes for the party is quite an achievement even though we could not achieve our set targets.”

In addition to that, it also set a target of grabbing all the 47 seats in the region. However, it lost two of the seats; one to the National Democratic Congress and the other to an independent candidate who was a former member of the NPP.

Mr Pyne said the party would need to work harder to ensure that they get higher voter turnout in subsequent elections.

In the meantime, he said, the party would conduct a research to investigate its performance to find out what did not work for them and submit a report for action.

Asked if he was surprised at the performance of the main opposition in the region, the regional secretary said, “I am really surprised. I don't know how they did it but I am surprised they got that figure.”

That, according to him, was an indication that the party needed to work harder to maintain its grip on the region.

Biiya Mukusah Ali reports that the usual hustle and bustle on the principal streets of Sunyani in the Bono Region was absent yesterday as residents stayed glued to their television sets to monitor analysis of the just-ended presidential and parliamentary election and wait for the EC to announce the results.

A 41-year-old teacher, Mr Isaac Boakye Dei, told the Daily Graphic that he was not in a rush for the declaration of the presidential results.

"If it will take the EC three more days to get us credible results and also resolve some of the concerns raised by some of the candidates, I'm okay just for the sake of peace," he stated.

However, a resident Mrs Milicent Azomyann, disagreed with the assertion of Mr Dei explaining that the situation was creating unnecessary tension in the country.

She encouraged the EC to go ahead to declare the results and urged those who would disagree with the results to go to court for justice.